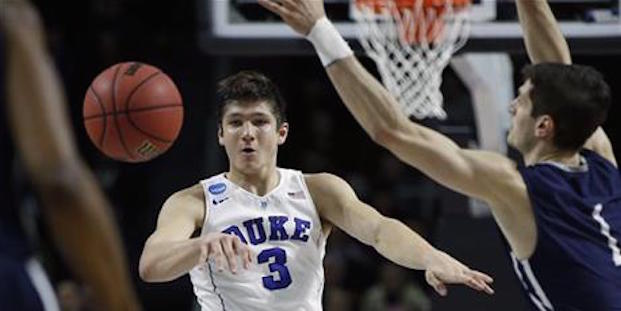 A great deal is expected of Duke basketball this season. They entered the year ranked No. 1 and as the odds on favorite to win the 2017 NCAA Championship. Their much-heralded freshman class — which included four five-star players — added to the excitement, and understandably so. Unfortunately for Mike Krzyzewski, though, three of those players — Harry Giles, Jayson Tatum and Marques Bolden — have yet to play a game while dealing with various injuries. The fourth, Frank Jackson, has been darn good, and looks like a star in the making.

With the exception of the Rhode Island win — when Jackson made his first career start, Duke has started this group of players: Grayson Allen, Matt Jones, Luke Kennard, Amile Jefferson and Chase Jeter. All five of those players have spent at least one season on the Durham-based campus. There’s a lot of shooting, talent and experience in that starting lineup, which has been quite productive: they’re No. 1 in the nation in points per 100 possessions, according to Ken Pomeroy.

Duke’s offense, however, has been a little stripped-down to start the season. Their half court sets have been simplistic. There’s one basic action, and then the offense just tries to breakdown the defense by using their superior talent. For instance, Allen will come off a pindown screen and receive a pass above the three-point line. Now, it’s up to him to orchestrate the offense. This usually involves him taking turns playing a two-man game with either Jackson, Jones or Kennard. If that’s not there, he’s looking for a ball screen from Jefferson, and they want to run pick-and-roll.

This can also lead to isolation-heavy offense; Duke has assisted on 47.5 percent of their made field goals, which ranks 242nd in the nation, per KenPom. Since the 2000-01 season, Duke has had just four teams that assisted on fewer than than fifty percent of their made field goals: 2003, 2005, 2012 and 2016. However, through five games, this current Duke roster, which is devilishly talented but also lacking a true point guard, has the lowest mark of the last 17 seasons.

Duke has also utilized Jefferson as a distributor in the high post. Out of a horns set — with two post players standing parallel near the top of the key, and shooters in the corners — Duke will enter the ball to Jefferson north of the free throw line. He has the option to face up, drive it or look for a cutter, but Duke is want to use Jefferson as a hub for hand-offs. Jefferson forms a natural screen just by 6-foot-9 and taking up space; their guards can receive the ball, and get moving toward the rim while the defense scrambles to switch or help. Depending on where the help comes from, this can free shooters up on the perimeter for kick outs.

Krzyzewski’s motion-based offense, which has become increasingly four-around-one, is wildly effective, but it’s not exactly the most complicated of schemes. They take advantage of their superior shooting, and make opponents defend out to the corners; the high post is used for ball reversals once the defense has already been bent in the other direction. Duke puts a premium on spacing. Take for instance this play for Duke’s 2005-06 season, courtesy of Basketball HQ. There are two screens and a ball reversal before the Blue Devils set a staggered down screen to free J.J. Redick up at the top of the key.

It’s reductive to say that Duke’s offenses have been simplified because of the one-and-done rule, especially with regards to this season — five of their six current rotation players are sophomores, juniors or seniors. However, it’s worth examining. Coach K’s rosters have gotten younger; maybe this has caused him to dial back some of their system.

Duke’s roster is annual stocked with hyper-talented and smart, intuitive players, but if you only have a few weeks to drill plays, that makes it challenging to expand basic sets and reads. In these motion offenses: the more reps you have, the more sophisticated your actions can get. Once the season gets going, practice time limited and valuable; it’s not easy to broaden the playbook when the team is playing multiple games per week.

It’s almost always a good thing for the ball to be in Allen’s hands. He’s a dynamic creator who could be a millionaire playing in the NBA right now. It works. However, if Allen or Jefferson were to sustain a serious injury, things could get clogged for the Blue Devils on offense. It’s nearly tricky to see Duke relying on Antonio Vrankovic for dribble hand-offs. Jackson, in this scenario, would be asked to do a lot.

Here’s Allen a few weeks back against Grand Canyon; watch how many of his 25 points come after one pass.

Coach K did an amazing job with Team USA basketball; he’s the greatest national coach in the history of men’s program. During the 2016 Olympics, though, the American’s were missing the two best creators/passers in their system: Chris Paul and LeBron James. Their point guards were Kyrie Irving and Kyle Lowry — two of the best players in the universe. However, neither are of the pass-first variety. With little to no time leading up to the games, there’s limited practice time go over sets.

Team USA went 8-0 and collected their third-consecutive gold medal, but due to the team’s lofty standards, there was criticism of the team’s pedestrian offense. The ball stuck a little too much, and it resulted it contested shots. We’re seeing something similar with this current iteration of Duke, thus far.

It’s important to remember: this season has just started — there’s a ton of basketball to be played over the next five months. Players will get healthy; Duke’s rotation will change, which means Duke’s offense may be reformatted on the fly. Duke’s offense has been very good so far, and Allen’s yet to starting shooting well (he’s reportedly not 100 percent health-wise). Their group of players should become more cohesive, and they currently have three likely lottery picks sitting on the bench with injuries. The Blue Devils will get better offensively through their sheer talent. Teams that allow them to get out in transition will get run off the floor. However, when they do get to full strength, keep an eye on what Duke runs in the half court.