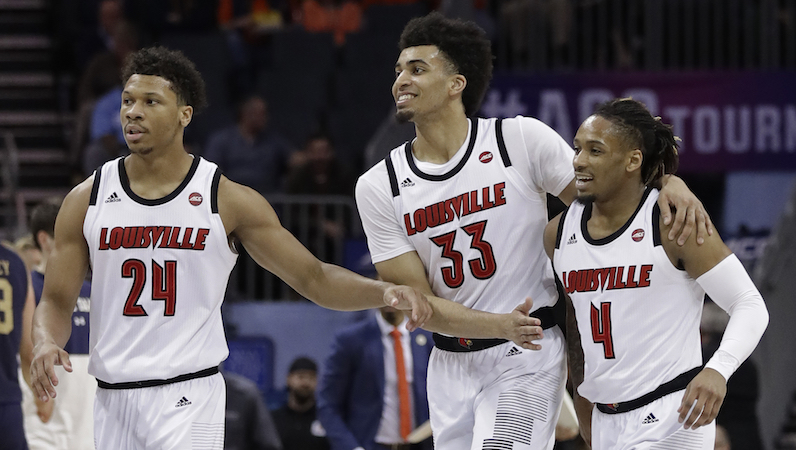 Louisville's Khwan Fore (4), Jordan Nwora (33) and Dwayne Sutton (24) celebrate in a timeout during the second half of an NCAA college basketball game in the Atlantic Coast Conference tournament in Charlotte, N.C., Wednesday, March 13, 2019. (AP Photo/Chuck Burton)

After a one-year hiatus, Louisville basketball (20-13, 10-8 ACC) is back in the NCAA Tournament — this time under first-year head coach Chris Mack. We already know plenty on this Louisville team, which is led in scoring by All-ACC forward Jordan Nwora: 17.2 points per game (57 percent true shooting).

However, if you’re an ACC/Louisville fan, you may not know so much about Minnesota (21-13, 9-11 Big Ten) — save for the semi-comedic/awkward Pitino connection. Let’s get you caught up, quickly.

This Minnesota team is kind of old school on offense; the Gophers rarely shoot 3-pointers (less than 29 percent of their FGA) and want to attack the rim. According to KenPom, Minnesota got just 22.2 percent of its total points this season from beyond the arc, which ranks 350th nationally.

On the flip side, Minnesota (17.7 seconds per possessions on offense) scored 55 percent of its points on 2-pointers (No. 35) and the remaining 22.8 from free throws (No. 15). Far from a super-efficient offense, the Gopher did assist on over 60 percent of their field goals this season. In the half court, 49 percent of Minnesota’s field goal attempts were at the rim or post-ups, per Synergy Sports.

Along the front line, Minnesota has three players — veterans Amir Coffey and Jordan Murphy, along with Daniel Oturu, a freshman — with usage rates above 23 percent. All three of those guys draw more than four fouls per 40 minutes — led by Murphy (6.2). That trio combined to attempt 550 free throws and 874 2-pointers this season.

This Minnesota team likes to post-up on offense, too. According to Synergy Sports, over 11 percent of Minnesota’s possessions came via a post-up: 0.88 points per possession (47.2 FG%). Again, Minnesota likes to get to the line, and the post is a prime avenue for that strategy.

The Gophers got to the free throw line on 20.2 percent of their post-ups possessions, according to Synergy, a top-45 number nationally.

Oturu and Murphy are the lead dogs here. The 6-foot-10 Oturu shot 50 percent on post-ups this season while Murphy (6-foot-7, 250 pounds) scored 0.94 points per possession — right next to Wisconsin’s Ethan Happ in terms of Big Ten post-up efficiency. Murphy drew a shooting foul on 26 percent of his post-up possessions this season, too. That was easily the highest rate this season among Big Ten players with at least 50 post-up possessions.

Defensively, Minnesota ranked inside the top 45 this season in terms of adjusted efficiency. Despite being one of the tallest teams in the country, Minnesota doesn’t block many shots (10.3 percent block rate) or force a substantial amount turnovers (seven percent steal rate); that could bode well for a Louisville team that turned the ball over on 18.4 percent of its possessions in ACC play.

However, the Gophers did well by running opponents off the 3-point line. Less than 34 percent of opponent field goal attempts were of the 3-point variety — a top-20 number nationally. From the ACC, that’s in the same ballpark as NC State and Duke.

As we’ve discussed in this space: Louisville loves to let it fly from deep. Nearly 44 percent of Louisville’s field goals originated from beyond the arc: 43.7 percent. That’s a top-55 number nationally; only two ACC programs — Virginia Tech and Notre Dame — posted higher rates. This season, the Cards had 18 games of 25+ 3-point attempts.

Keep Minnesota off the line, avoid turnovers and the math could be in Louisville’s favor.

The Rick/Richard Pitino connection isn’t the only parallel in this matchup, though. Minnesota’s backup 7-foot center, Matz Stockman, played for three seasons at Louisville: 2014-17. Stockman was a deep reserve on an excellent 2016-17 Louisville squad — playing alongside Donovan Mitchell, and behind Anas Mahmoud, Ray Spalding, Mangok Mathiang and Jaylen Johnson.

In his one season of eligibility at Minnesota, Stockman has played on the fringe of Minnesota’s rotation: 27 games, 10.7 minutes per contest. He’s played in just four of the last eight games for the Gophers, too. Stockman does offer some rim protection when he hits the floor, though: 3.3 blocks per 40 minutes this season.