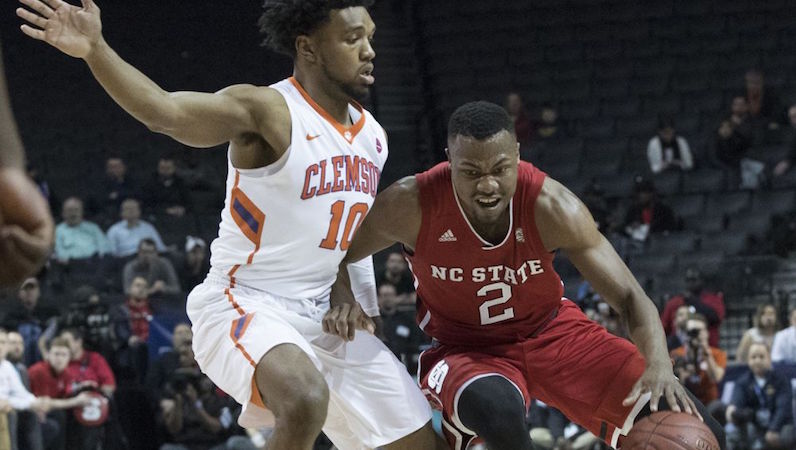 It may not be possible to read an article about Kevin Keatts’ arrival at NC State that doesn’t make mention of how he wants to play basketball. You will read the same words over and over again — the team wants to play fast and chuck three-pointers. That’s a good thing, by the way. Teams should want to run and attempt shots that have a higher expected gain.

However, for the Wolfpack next season, who exactly will those shooters be?

In the 2016-17 season, UNC Wilmington attempted 2,231 field goals — 917 of which were of the three-point variety. For the Seahawks, more than 41 percent of the team’s shots came from beyond the arc, which ranked inside the top 50 nationally, per KenPom.com.

As a team, Wilmington shot 36.6 percent from distance and scored 34.5 percent of its total points on three-pointers. This rate, according to KenPom, ranked 70th in Division I.

During the 2015-16 season, Wilmington shot the ball far less frequently from behind the line. Per KenPom, 33.6 percent of the team’s field-goal attempts were three-pointers (No. 224 nationally), and only 27.2 percent of Wilmington’s points originated from beyond the arc.

In both seasons, though, the Seahawks averaged over 70 adjusted possessions per game. UNCW played fast.

Regardless, the power of the three-pointer will be key for Keatts and NC State. Some of his pet sets at Wilmington were heavy on spacing — five-out, slash-and-kick attacks that aimed to get a driver going to the rim surrounded by shooters. Which leads us to the following question…

If a three-pointer went up for NC State during the 2016-17 season, it was almost certainly Terry Henderson, Dennis Smith Jr. or Maverick Rowan. Those three guys combined for 186 made threes on 503 attempts — 37 percent. Henderson, DSJ and Rowan accounted for 79.2 percent of the Wolfpack’s three-point attempts.

Here’s the problem: All of those guys are gone!

Smith is a signed, sealed and delivered lottery pick; Rowan is attempting a pro career, too. Henderson’s college career was cut short late last month when the NCAA denied his appeal for a sixth season of eligibility.

Here are some of the options

Redshirt junior Torin Dorn is the team’s leading returning three-point shooter. Dorn drained a respectable 36.4 percent of his treys (2.1 per game) in 2016-17. Those numbers are a little deceiving, though. Dorn went just 7-of-28 (25 percent) on three-pointers in conference games. This after he shot nearly 46 percent from distance over the first 13 games of the season.

Next season, though, the Pack will count on Dorn to shoot more from distance. This past season, less than 29 percent of his field-goal attempts came from beyond the arc. Under Keatts, that will change.

Markell Johnson played away from the ball with some regularity as a freshman — mostly in dual-point-guard lineups alongside Smith. NC State had some success with that look, including in the closing minutes at Duke.

Johnson is an explosive driver of the basketball; however, he struggled with his jumper last season. According to Synergy Sports, Johnson scored just 0.56 points per possession on spot-ups (22.7 FG%).

NC A&T transfer Sam Hunt could help in this capacity. He shot above 35 percent on three-pointers this past season and launched 6.5 treys per game.

The cavalry is on the way

It took Keatts one full season to really get his offense going at Wilmington. With very few seniors on next season’s roster, turnover should by high from Year 1 to Year 2 for NC State. Plus, the Wolfpack scored big on the transfer market — adding scoring wings C.J. Bryce and Devon Daniels. Daniels, especially, could benefit from a three-heavy approach to offense.

Here’s a quick look at how the Seahawks improved offensively with Keatts running the show down at the beach.

From the table above, it’s obvious how the more Keatts got his system and players in place, the more threes the Seahawks took. Last season, when Wilmington won 29 games, Keatts’ club ranked No. 19 nationally in offensive efficiency.