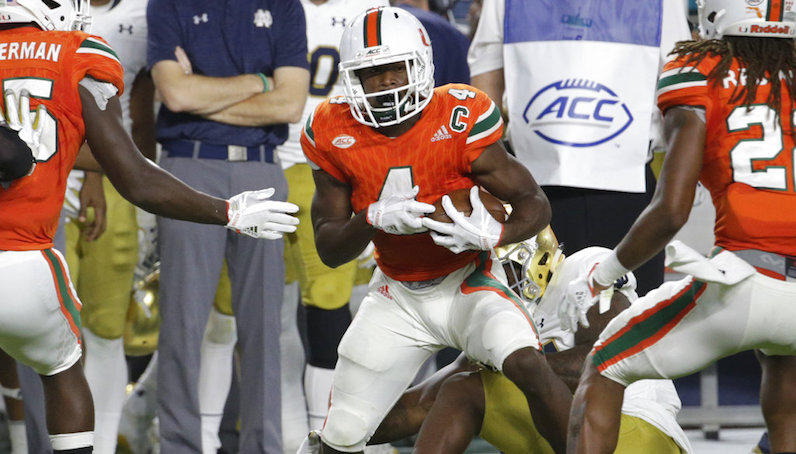 Miami defensive back Jaquan Johnson (4) runs after intercepting the football during the first half of an NCAA college football game against Notre Dame, Saturday, Nov. 11, 2017, in Miami Gardens, Fla. (AP Photo/Lynne Sladky)

Miami’s defensive line is stacked with future NFL players. The Turnover Chain is one of the most fun developments of the 2017 sports calendar. Those two elements control the majority of the gravitational pull when it comes to headline-grabbing for the undefeated Hurricanes.

This defense is more than a fast and physical front seven, though. Miami has serious playmakers on the back end, too. That group includes junior safety Jaquan Johnson.

After playing in all 13 games in 2016, and making five starts, Johnson has morphed into the team’s leading tackler in 2017. Johnson has 66 total tackles — 40 of which have been individual tackles. He’s one of only three ACC players with at least three interceptions and 40 individual tackle, per Sports Reference.

Those three interceptions — along with a fumble recovery — means Jaquon Johnson is a frequent recipient of the Turnover Chain. Johnson and Michael Jackson are the only two Hurricanes to adorn themselves with the chain four times this season.

So far, these men have rocked the Turnover Chain. pic.twitter.com/FTR973mNeq

For its position group, Miami’s defensive line leads the nation in Havoc Rate. That unit has either defended a pass, recorded a tackle for loss or forced a fumble on 8.5 percent of the plays it’s faced. Clemson’s defensive line ranks seventh: a 6.9 percent Havoc Rate.

Thanks in part to Johnson, though, the defensive back group isn’t far behind. Johnson, Jackson — along with Sheldrick Redwine, Malek Young and Dee Delaney — have a Havoc Rate of seven percent, which ranks 29th in the FBS, per Football Study Hall.

In the win over Notre Dame, Johnson was all over the freaking field. The 5-foot-11 ballhawk recorded eight total tackles and a first quarter interception of Brandon Wimbush. That pick set Miami up with a short field; two plays later, Malik Rosier cashed in on a 16-yard rushing touchdown. The Hurricanes never looked back.

According to Sports Reference, Johnson became the 23rd player in the ACC this season to record eight or more tackles and an interception in the same game.

As Miami approaches its showdown with No. 2 Clemson in the ACC Championship — a game that could matter a lot when it comes to the CFP — Manny Diaz and Mark Richt will need Johnson to continue to hold things down behind the monster defensive line.

How long can the Hurricanes hold on to Manny Diaz?