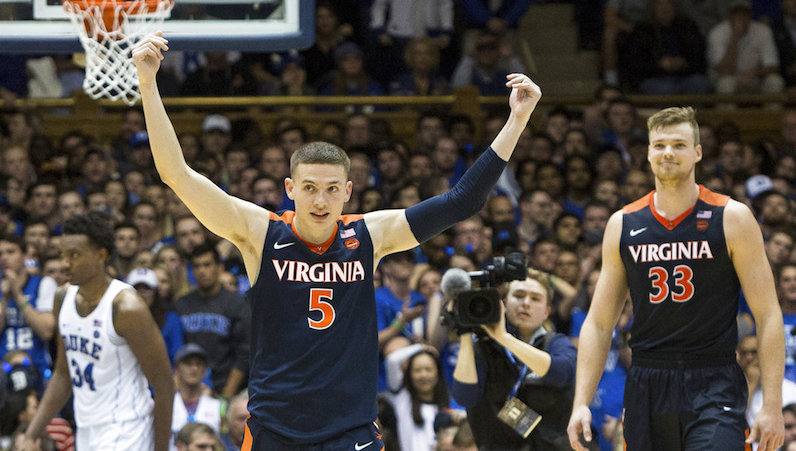 With the No. 1 seed in the ACC Tournament — and likely the NCAA Tourney — already locked up, an injury was about the only way the regular season finale against Notre Dame could have harmed Virginia’s chances of a successful postseason run.

That’s why the collective hush at John Paul Jones Arena as Kyle Guy stayed on the floor Saturday holding his knee echoed across a nation pondering upcoming bracket pools.

“I was scared,” redshirt freshman De’Andre Hunter said. “It looked bad with him laying on the ground like that.”

As it turns out, Guy’s sprained left MCL will require a brace, but won’t keep him out of the Cavaliers’ ACC Tournament opener. The bigger question: If Guy will be able to play at the level that made him Virginia’s lone first-team All-ACC pick.

There’s not only a concern over lingering effects on the knee, but a recent revelation he’s played the entire season with a bulging disc in his back. Obviously, that hasn’t kept him out of any games, but it’s fair to wonder if wear and tear of the season could add up.

The later weeks of the season haven’t been particularly kind to Guy during his two years at Virginia. He’s been held to single digits in three of his past four games, and in his career he’s been held scoreless five times after the calendar hit Feb. 18, including the most recent game.

Guy said rest is essentially the only treatment for his back, and he’d prefer to stay busy with the Cavaliers into April, so he’ll play banged up. But it’s quite possible Virginia will look for extra minutes and production from guards off the bench, especially during an ACC Tournament that is relatively meaningless for the Cavs in the big picture.

This is, of course, among the reasons UVA added graduate transfer Nigel Johnson this summer for experience and depth. Johnson, whose career has also taken him to Kansas State and Rutgers, has actually played fewer than his season average of 17 minutes per game in each of the Cavs past two contests, but might see more time in Brooklyn and UVA coach Tony Bennett thinks he should be ready.

“I’m sure coming in he thought maybe he’d step right in for London (Perrantes),” Bennett said. “But none of that is promised. He’s shown up and he’s worked hard. He’s willing to do whatever it takes for us. He can guard the ball and touch the paint with his speed, and his experience in a lot of BCS games is important to us.”

Important, even potentially crucial, as the Cavaliers push for their first Final Four of the Bennett era.