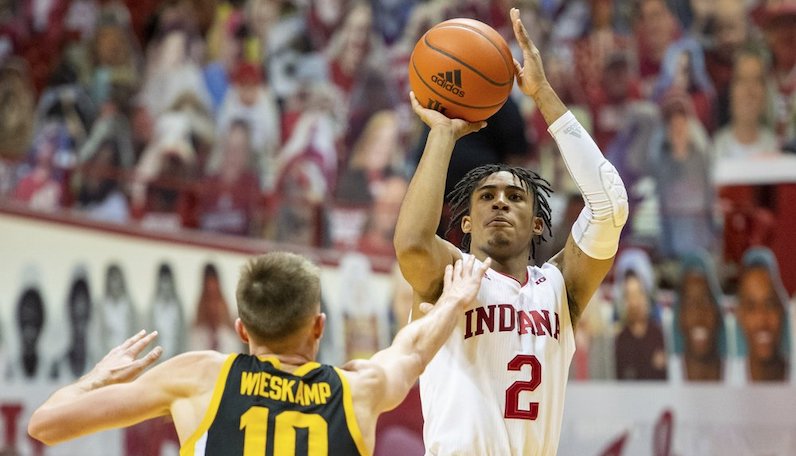 In desperate need of some offensive firepower, Virginia landed one of the top shooters in the transfer portal: Armaan Franklin.

A native of Indianapolis, Franklin committed to Indiana over Purdue as part of Archie Miller’s 2019 recruiting class, along with 5-star power forward Trayce Jackson-Davis. During his time with IU, Franklin appeared in 54 games (29 starts). He entered the transfer portal back on March 23. Indiana fired Miler the week before.

After struggling as a reserve his freshman season, Franklin became a full-time starter for the 2020-21 season. Franklin excelled in his new role; the 6-foot-4 guard 11.4 points, 2.1 assists and 1.2 steals per game. Franklin also emerged as one of the top 3-point shooters in the Big Ten: 36-of-85 3PA (42.4 3P%). Over 47 percent of his career field goal attempts at IU came from beyond the arc.

According to Synergy Sports, Franklin posted an effective shooting rate of 70.6 percent on catch-and-shoot attempts this season. This ranked third in the Big Ten among players with 50+ FGA — behind only Da’Monte Williams and Joe Wieskamp.

Playing inside Miller’s motion offense, Franklin scored 1.48 points per off-screen possession. The reps he gained playing in this system should help him flow right into Tony Bennett’s blocker-mover/side approach.

Franklin is a solid defender, too. Several advanced numbers seem to indicate that Franklin may even be a little underrated on that side of the floor.

While Franklin doesn’t get to the line much (26.6% FTA rate), he has some playmaking abilities. In over 1,110 career minutes with the Hoosiers, Franklin recorded a 16 percent assist rate.

The state of Indiana has proven beneficial for Virginia basketball, in recent years. Kyle Guy, star shooting guard on the 2019 title team, hailed from Indianapolis.

It seems very likely that Virginia could trot out a 3-guard lineup for starter/leverage minutes next season: Kihei Clark, Reece Beekman and Franklin. That’s a smaller backcourt/perimeter trio, but Beekman can basically guard anyone; Franklin provides a necessary shooting component, too.

Franklin’s scoring could prove crucial for a Virginia program that’s set to lose both Sam Hauser and Jay Huff, two excellent shooters and scorers. After a brilliant 2020-21 season, Trey Murphy III has emerged as a real NBA prospect. Murphy should at least test the draft process. If he stays in, there’s a chance Murphy could go late in the first round.

On top of that, Jabri Abdur-Rahim transferred out of the program early last week. While Abdur-Rahim played sparingly this season, he was a major recruit and profiled as someone that could take on a larger offensive share/role.