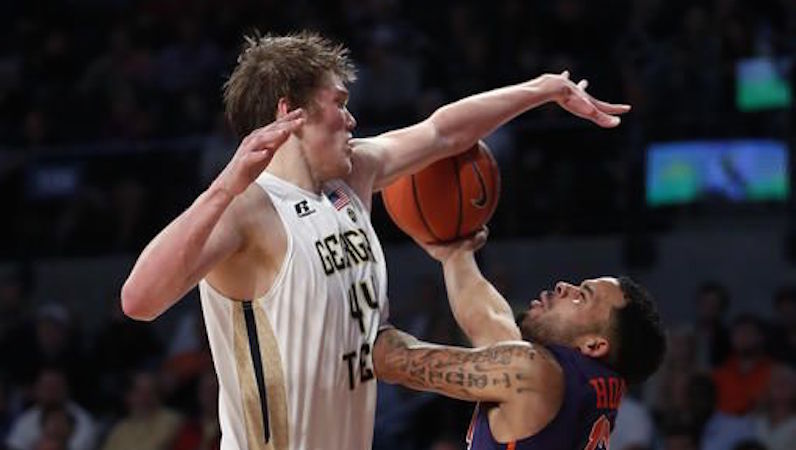 Artists come in all shapes and sizes, and their subject matter can cover a wide range of topics. He is no Picasso or Mozart, but Ben Lammers of Georgia Tech — the ACC’s maestro of rejection — has emerged as one of the nation’s top shot-blocking artists.

The 6-10 center ranks second nationally in blocks with 3.3 per game. According to KenPom.com, Lammers has rejected 9.5 percent of the two-point field goals he has defended this season, which ranks 31st in the nation. Per Synergy Sports, opponents have scored just 0.72 points per possession (40.8 field-goal percentage) on post-ups defended by Lammers. Of ACC players who have defended at least 50 post-ups this season, that ranks third in the conference. Lammers has defended 94 post-ups, according to Synergy, which is more than anyone else in the league.

The Yellow Jackets are one of three ACC teams that rank inside the top 10 of KenPom’s adjusted defensive efficiency metric; Georgia Tech is No. 9 in the nation, allowing 91.4 points per 100 possessions. Lammers has been the last line of defense for this crew, too. There is no one who is a part of this league — players, coaches, media, whatever — who foresaw this development before the season. Kudos to the job Georgia Tech has done.

Lammers is more than just a windshield wiper at the rim, though. First-year coach Josh Pastner has needed Lammers to provide interior scoring, and the junior — for the first time in his career — has become a low-post hub. He is efficient, scoring 14.7 points per game on 52.5 percent shooting. That is quite the leap when you consider that The Lamminator averaged just 2.8 points per game over his first 55 career games.

The big man has really found a home in Pastner’s offense as a screener and roller. According to Synergy, Lammers ranks second in the ACC with 1.33 points per possession as a roll man this season — on 71.4 percent shooting, which also ranks second in the league. Lammers will never be confused for Usain Bolt, but he is no ground-bound plodder, either. Per Synergy, of ACC players with at least 10 transition possessions, Lammers ranks No. 1 in the league with 1.69 points per possession (80 percent field-goal rate). He runs selectively but makes sure to capitalize when he gets out on the break.

Georgia Tech has already far exceeded its low preseason expectations, and this team’s NCAA tournament hopes are not dead yet. The Yellow Jackets need to finish strongly, and that will require more production from Lammers, who has joined Amile Jefferson and John Collins as some of the best two-way post players in the ACC.