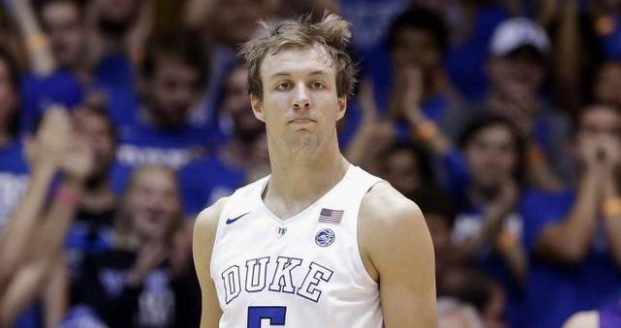 Quick trivia question: Who leads Duke in both scoring and assists?

If you guessed Grayson Allen, well, unfortunately you’d be wrong. Sophomore Luke Kennard, through the teams first seven games, is No. 1 on the Blue Devils roster in scoring (17.1 points) and assists (3.7). Despite struggling from the field the last two games — wins over William & Mary and Appalachian State (2-of-13 on 3-pointers) — Kennard has been a prolific shooter and Duke’s best player this season.

Duke entered the 2016-17 as the No. 1 team in the nation. Their combination of incoming rookie talent, along with the returns of Allen and Amile Jefferson, is an undeniably awesome mix. Lost amid the hype, though, was where Kennard could ascend to as a player. We’re seeing that now.

No one could blame Kennard if he felt a twinge of middle child syndrome, but he’s certainly playing ball as if he’s completely unaffected by some greater outside perception. Kennard’s chucking 5.3 threes per game, and is making 39.5 percent; he’s getting to the free throw line more as a sophomore, too (free throw rate of 30.2 percent). Kennard ranks seventh in the ACC is free throw percentage — 88.5 percent. He’s shooting 54.2 percent of two-point field goals, which is another improvement to his game. All of this adds up to an incredibly robust true shooting rate of 61 percent; this would’ve ranked as a top six metric in the ACC last season.

Kennard’s improved playmaking has been a significant boon for the Blue Devils, too. His 26 assists are not only tops on Duke, but they’re more than all but seven other players in the ACC. Duke has been rather simplistic on offense this season; one of their best ways to generate points has been the two-man game between a battery of their perimeter players. Allen, who had been hobbled with injuries to start this season, and Kennard clearly have a connection together in this capacity — penetration, kick out, relocate back above the arc. The ball just pings back and forth between the two. Here he is finding Matt Jones for a weak side corner three against Grand Canyon:

So far, Kennard has nearly doubled his assist rate from his freshman season; when he’s on the floor, the Ohio native has assisted on 19.3 percent of Duke’s made field goals.

According to the invariably useful Ken Pomeroy, Kennard leads the Blue Devils in offensive rating: 127.7 points per 100 possession (163rd in the Division I). This is what happens when you combine efficient shooting with trips to the free throw line, and a distaste of turning the ball over (turnover rate of 10.9 percent). Duke, by the way, leads the nation in adjusted offensive efficiency, per KenPom.

Freshmen Harry Giles and Marques Bolden have yet to play a minute this season, and Chase Jeter’s development seems to have plateaued. Mike Krzyzewski has needed all hands on deck to clean the glass this season — Kennard has responded. Kennard’s averaging 6.7 rebounds per game (10.6 per 100 possessions), which is second on their roster — behind only Jefferson. He has 47 total rebounds on the season, which ranks ahead of long-limbed menaces like North Carolina’s Tony Bradley. When Jefferson’s the lone true big man on the floor — with Jeter and/or Antonio Vrankovic (who’s quietly having a very nice season) on the bench — Kennard’s the team’s nominal four; they need him to snag boards and end opponent offensive possessions. Jefferson has held the fort down in the paint, but Kennard has chipped in with significant contributions.

It’s tricky to evaluate Duke at this moment — three of their best players have played a combined zero minutes so far this season. They’re going to look chemically different when those guys return; the rotation, lineup combinations and half court sets will all look different. Kennard will likely play fewer minutes, and his rebounding responsibilities should be reduced. This will allow him to focus more on what he does best: bomb threes, score and create for others.

Until then, though, enjoy watching a second-year player come into his own.