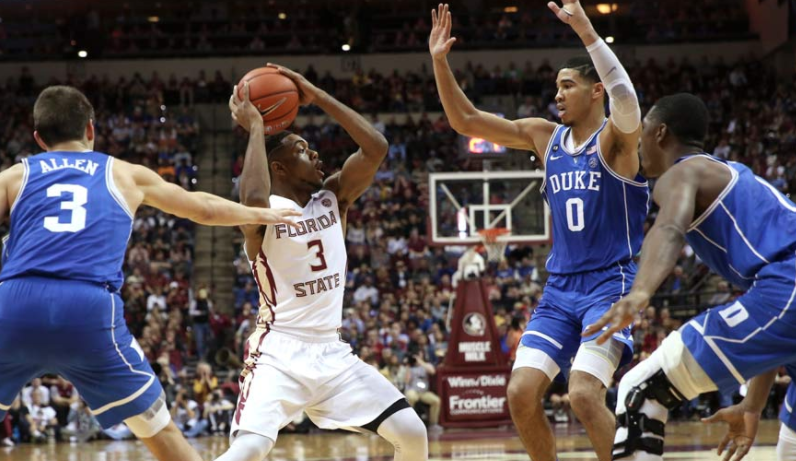 Duke entered the 2016-17 basketball season with one of the top freshman classes in America — right up there with Kentucky (shocker). Almost immediately, comparisons were made between this group of freshmen — specifically Jayson Tatum, Harry Giles, Frank Jackson and Marques Bolden — and the freshman class from two seasons ago that helped power Duke to an NCAA championship: Justise Winslow, Tyus Jones, Jahlil Okafor and Grayson Allen.

It’s natural to stack classes up side by side when making an evaluation. This, however, probably isn’t fair to the current group of freshmen.

Those guys from two years ago included three first-round picks, two of which — Okafor and Winslow — came within the top 10 picks of the 2015 NBA Draft. Injuries have plagued this current group, too. Tatum, Giles, Jackson and Bolden have all missed at least one game.

With that in mind, though, let’s see how this season’s diaper dandies compare and contrast on offense with their predecessors from two years ago. Here’s a snapshot of how the two classes stack up (stats courtesy of Synergy Sports).

The edge here clearly goes to the class from two seasons ago. Okafor was a once-every-five-years type of prospect: a 6-11, 270-pound low-post hub with the footwork of a ballerina. Those 328 post-ups were by far the most in the ACC that season — Syracuse’s Rakeem Christmas was No. 2 with 269. Okafor was one of only three players in the NCAA that season to record more than 300 posts, per Synergy, and to score above 0.9 points per possession on such a large volume of possessions is extremely productive. Okafor scored 657 points during his one season at Duke — 308 of those came from post-ups.

Tatum has the the highest number of points per possession out of the post; Duke should look to post him up more, perhaps, especially with Amile Jefferson sidelined. However, he pales in comparison to Jah.

Again, Okafor was a monster. Jah scored nearly 1.1 points per possession on isolations (65 percent shooting). Winslow and Jones used more iso possessions, but both rookies shot under 32 percent on such sets. Tatum clearly has a canny ability to score one-on-one, which has NBA evaluators drooling, and he is shooting a high clip — 54.2 percent — but the edge once again goes to the 2015 team.

Grayson Allen makes an appearance, too: 1.143 points per possession — the highest number among this group.

Here’s where Winslow really starts to emerge statistically; the lefty and Okafor were both juggernauts in transition during their one season in Durham. Some remember Okafor as a plodder, but he shot nearly 90 percent in transition. The big fella delivered when he ran the floor.

Frank Jackson, halfway through his freshman season, has put together a solid resume in transition — nearly one point per possession on 50 percent shooting, but once again the answer here is obvious.

Duke’s offense doesn’t often utilize high-ball-screen action in its motion-based offense. The Blue Devils want to slash and kick, and then use the middle of the floor for reversals. However, Jones was exceptional in this role while at Duke: 52.5 percent shooting, 1.155 points per possession, which ranked fourth in the ACC.

Winslow shot a nice percentage in pick-and-rolls, but Duke scored just 0.6 points per possession with the southpaw operating. That’s largely because on pick-and-rolls Winslow posted a turnover rate of 34.9 percent, according to Synergy — an incredibly high number.

Currently, Winslow is out for the rest of the season with a torn labrum, but the Miami Heat frequently utilize him as a playmaker in pick-and-rolls. It has translated to the next level.

Jackson has held his own in this category, no doubt. He was especially good in November against Michigan State, when he took over for a period of time in the second half. When the floor is spread, Jackson can cook in PNR action.

Tatum has the look of a guy who could excel orchestrating pick-and-rolls; he’s 6-8 with a tight handle and the ability to get to the cup. But in a limited sample (just eight possessions), Duke has scored a measly 0.375 points per possession. According to KenPom.com, Tatum has an assist rate of just 12.2 percent.

It simply can’t be stated enough: Okafor was a complete and total force offensively. His passing skills were vastly overrated at Duke, and he turned the ball over a little too much (18.2 percent turnover rate), but when it came to scoring, Okafor was nearly unstoppable. Per Synergy, Okafor made all 13 of the field goals he attempted as a rim-runner.

Bolden and Giles have been used as roll men on only four combined possessions, but in a slightly more featured role, Tatum has had some success. The two post players of this class — Giles and Bolden — could mature into potent rollers, but so far we haven’t seen much.

Frank Jackson has seen his minutes decline in the last month — playing just 20.9 minutes per game since the win over Tennessee State. His offensive numbers, however, are impressive. He has sizzled coming off screens this season — shooting nearly 67 percent. He earns the 2017 freshmen the edge in this category.

Winslow and Jones were both high-usage forces on spots-up for Duke during the championship run. Duke ranked No. 16 in the nation in points per possession off spot-ups that season — largely from the production of these two stud freshmen.

The Blue Devils, as a team, are actually scoring more points per possession on spot-ups this season (1.12) and rank No. 13 nationally, according to Synergy. However, that’s primarily driven by the brilliance of sophomore Luke Kennard, who is shooting a ridiculous 60 percent on spot-ups.

Jackson has shot a good clip on spot-ups and has a points per possession average above one. Tatum has been too loose with the ball on spot-ups, though: turning the ball over 26.3 percent of the time, per Synergy.

We just arrived at the midpoint of the college basketball season; there are a lot of games on the horizon for Duke’s current crop of freshmen. Hopefully, with a cleaner bill of health, these guys can start to perform more like what we have seen in a limited sample. Until then, the 2015 team reigns supreme in this hypothetical head-to-head.