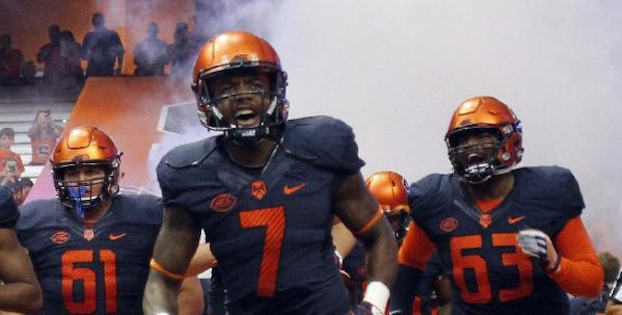 Amba Etta-Tawo leads the ACC in both receiving yards and receptions in 2016. (AP Photo).

There are 10 FBS players who have recorded at least 1,000 yards receiving so far this season. Three of them hail from the Power 5 conferences.

The lone representative from the ACC: Syracuse’s Amba Etta-Tawo.

One of the most entertaining surprises of the 2016 ACC football season has been the breakout performance of Syracuse’s Etta-Tawo. This isn’t Etta-Tawo’s first run through the ACC; in 2013, he recorded 31 catches for 500 yards as a freshman at Maryland. But he’s back now as senior transfer, and he’s starred during his second run though the league.

Etta-Tawo leads the ACC with 1,158 receiving yards — 404 more yards than second place (Mike Williams). He’s also No. 1 in the conference with 75 receptions.

Where does Etta-Tawo land in terms of efficiency when stacked up against the other 1,000-yard pass-catchers? The accompanying table includes the 10 receivers who have more than 1,000 yards through the air in 2016. As it turns out, Etta-Tawo easily holds his own.

East Carolina’s Zay Jones has stayed busy: 127 receptions on an absurd 171 targets (19 per game). Trent Jones of Louisiana Tech leads the nation with 1,318 receiving yards, and he’s first in this group with a catch rate of 81 percent. Dede Westbrook has had quite the season for the Sooners — 14.4 yards per target is an incredible number for a high-volume receiver.

Syracuse needs to win two of its next three games to become bowl eligible. That will be a tricky proposition to navigate with all three of those opponents coming inside the top 45 of the S&P-plus rankings. However, there’s no questioning the prolificness of Etta-Tawo, who has become one of the best receivers in America while playing in Dino Babers’ veer and shoot offense.