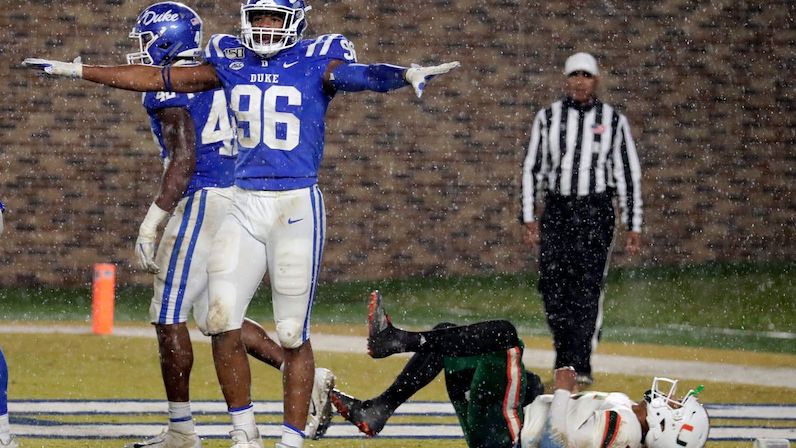 Duke's Chris Rumph II (96) celebrates in front of Miami's Jarren Williams (15) after Duke made a defensive stop during the third quarter in Durham, N.C., on Saturday. (AP Photo, Chris Seward

Along the defensive line, when it comes to full position group depth and talent, Clemson and Miami are the kingpins of the ACC. The Hurricanes could truly have a special front four in 2020. However, Duke has some serious power up front, too, led by Chris Rumph II. (In fact, the ACC is poised to be fairly loaded with pass rushers this season, including Gregory Rousseau, Jaylen Twyman and Charles Snowden.)

Rumph has a case as the ACC’s top edge rusher; while he’s light, at 6-foot-3 and 225 pounds, Rumph has speed advantage, which he’s unafraid to deploy. As Rumph looks to push Duke back to bowl eligibility in 2020, he also has a shot to solidify himself as one of the top NFL prospects in the conference.

After a redshirt in 2017, Rumph has played in all 25 games of his college career for the Blue Devils (one start). During that run, Rumph has collected 72 tackles, 21.5 tackles for loss, 9.5 sacks, one forced fumble, one fumble recovery and four pass breakups.

However, the advanced number are especially awing:

Most QB pressures among all returning ACC defenders in 2019: