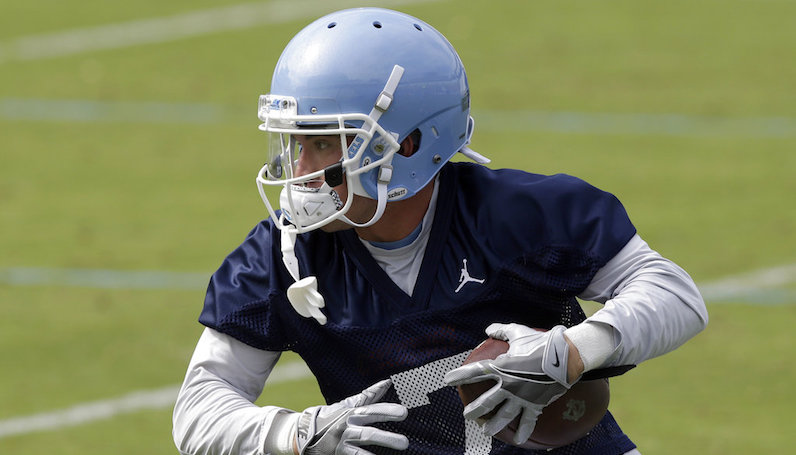 When North Carolina takes the field on Saturday against Cal, the more casual UNC fans will likely need to keep a media guide close by. North Carolina’s personnel will look rather different compared to the last few years.

Here's a first look at the depth chart as we begin Cal game week. Kickoff is just five days away! #GoHeels #BeatCal pic.twitter.com/oCyYMrnsUy

This is stating the obvious: we know that UNC must replace a lot of production and talent on offense. Luckily for Larry Fedora and whichever player lines up at quarterback, wide receiver Austin Proehl is present to help ease the transition.

Who will they miss most

Switzer, who ranked second in the league in receiving, hauled in 96 of those targets for 1,112 yards and a catch rate of 75 percent.

As one of the most productive receivers in the nation, a good chunk of Switzer’s production occurred on third down.

According to cfbstats.com, 25 of Switzer’s 96 reception came on third down. That resulted in 15 first downs, too.

Austin Proehl was the third-most targeted receiver in UNC’s offense in 2016 — nearly 17 percent of the team’s attempts when in his direction. Proehl snagged 43 passes on 75 targets — a catch rate of 57.3 percent, per Football Study Hall.

On third down, Proehl hauled in 10 receptions, which he turned into seven total first downs.

Undoubtedly, though, that total will increase in 2017.

For the Tar Heels to make a bowl game for the fifth consecutive season — a feat the program hasn’t accomplished since the 1990s — Proehl has to become strong option in the passing game. He needs to be a dependable No. 1 receiver.

Part of that will involved the senior receiver stepping up on high-leverage situations on third down. If he can do that, and nudge that catch rate above 60 percent, than UNC can keep things humming on offense.

Will UNC basketball have too many point guard in 2019?