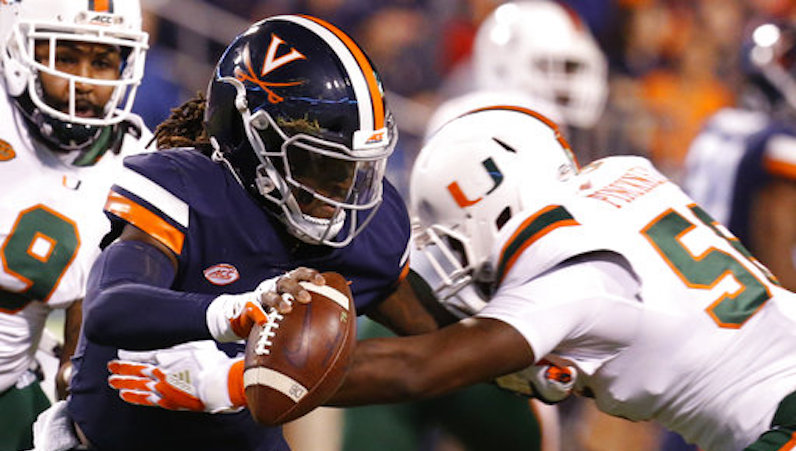 At the midpoint of the 2018 college football regular season, it’s safe to say that this isn’t exactly the blueprint the ACC hoped to follow. Miami’s loss at Virginia is great for Cavs fans, but a perception blow to the league; with only two teams in this week’s AP Poll, the league’s middle third is bloated and confusing.

Clemson hosts NC State next weekend, though, which should be good fun. Prior to that, let’s jump in and take a look at this week’s ACC Football Power Rankings.

Clemson, the undisputed heavyweight champs on the ACC, exits its bye week as the No. 3 team in the nation — one of the league’s two ranked teams. The Tigers host the ACC’s other ranked team — No. 16 NC State — on Saturday, and enter the week as a 17-point favorite.

If NC State is to spring a major upset at Clemson, the Wolfpack will need (*inserts coin into Cliche Machine*) to sustain drives on offense. Ryan Finley and company have converted just under 61 percent of their third-down plays this season — No. 1 in the FBS. Against Clemson: Opponents have converted 28 percent of their third-down plays, which ranks eighth nationally.

Doeren on NC State-Clemson not being on ESPN College GameDay: "Obviously you would think with 2 of the undefeated teams with 8 left, we'd have a good chance. … They can put it on AM radio for all I care. We're ready to play that game."

Saturday night’s comeback victory wasn’t exactly the most inspiring performance (522 total yards from North Carolina), but a Death By A Thousand Paper Cuts 18-play, 98-yard touchdown drive helped Virginia Tech avoid an embarrassing defeat at UNC. Ryan Willis was 8-of-10 on that final drive, including the game-winning touchdown toss to Dalton Keene.

The #Hokies' offense had 98 yards in front of them to win Saturday's game at North Carolina.

A group that struggled all night to sustain drives put together one of the best in the last three decades at Virginia Tech to pull it out. The story: https://t.co/FLAIsP0IPm #Hokies pic.twitter.com/mACUw0he43

With an open week to prepare, Duke’s defense was more than ready for the option attack of Georgia Tech. The Blue Devils join Clemson as the only other team this season to hold the Yellow Jackets under 250 rushing yards: 229 yards on 61 carries (3.8 yards per carry). Duke also recorded an impressive 11 tackles for loss — no easy feat against that ground game.

Daniel Jones was solid, too: 17-of-27 through the air for 206 yards and three touchdowns.

The five highest passing grades from the weekend among ACC QBs pic.twitter.com/dRZUcm7Y97

Once again, Miami’s defense was up for the challenge. At UVA, the Hurricanes intercepted Bryce Perkins three times (including two from Trajan Bandy), four sacks, nine tackles for loss and just one touchdown allowed. Virginia posted only 231 yards of total offense and converted on only 30 percent of its third-down plays.

Despite the result – Miami CB Trajan Bandy had himself quite a night against Virginiahttps://t.co/bh1GM96m4g pic.twitter.com/pClupOGZZU

The offense was, again, underwhelming; N’Kosi Perry was benched; however, Malik Rosier didn’t exactly light it up — 52.2 percent completion rate, 7.4 yards per attempt and an interception.

Virginia’s thrilling upset over then-No. 16 Miami on Saturday was a bit of a rarity. The Cavs were bogged down on offense, going up against an electric Hurricanes defense: 231 total yards. This victory marks just the 57th time since the 2000 season that an ACC team has amassed under 240 yards of total offense in a game and come away victorious.

Coming off an open week, Syracuse has lost two straight, but the numbers still like this team; ESPN’s FPI ranks Syracuse as a top-45 team in the FBS. Can Syracuse get it back on track next Saturday when it takes on UNC for the firs time since 2003?

Despite not having star running back A.J. Dillon (ankle) for the second straight game, Boston College still became the latest team to run all over Louisville: 251 yards, two 100-yard rushers and three touchdowns. Zach Allen and the Eagles defense were rock solid, too.

This week will be a telling one for Florida State: How do the Seminoles, after a bye week, respond at home against Wake Forest? (Regardless of the score, though, everyone will leave a winner Saturday night because Big Boi is playing at halftime of the game.) After the Deacs, things get pretty crunchy for FSU — three straight top-25 opponents: Clemson, NC State and Notre Dame.

No one gave Pittsburgh much of a chance at Notre Dame; the Irish were a 21-point favorite at some outlets prior to Saturday’s affair. However, the Panthers fought hard, won the turnover battle (+2) and nearly pulled up a wild upset. Unfortunately, moral victories only mean but so much.

Since Paul Johnson arrived at Georgia Tech in 2008, the Yellow Jackets have only two games when the offense has carried the ball at least 60 times and run for under 250 yards. Both games were losses, and both game happened against Duke and David Cutcliffe (2015 and 2018).

Since Florida State joined the ACC, Wake Forest has just two wins down in Tallahassee — back in 2006 and 2008. Can Wake finds its first conference win of the season on the road at Doak Campball against Brian Burns and FSU?

Next up: at Florida State

North Carolina got some inspired ball from Cade Fortin and Nathan Elliott, but its field goal machine offense fell a little short against Virginia Tech. Freeman Jones made four field goals on six attempts — all four makes inside of 35 yards. UNC has only eight touchdowns from the red zone this season — dead last in the ACC.

Oh, boy. This is a serious mess, right? On offense, Louisville stumbled all over itself: 4.9 yards per pass attempt (170 passing yards), 1.5 yards per carry. Say it with me once more: Where art thou, Lamar Jackson?