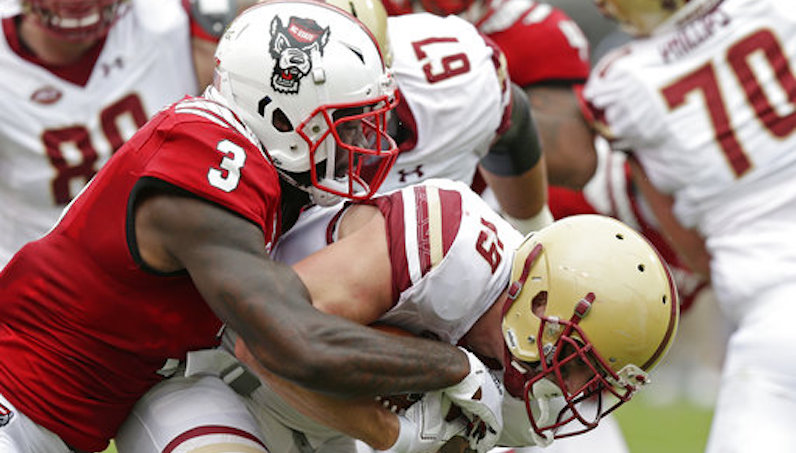 Heading into the 2018 season, the consensus was that the strength of this NC State football team would be its offense. So far, that’s proven true; Ryan Finley, behind a veteran offensive line, has teamed up with a top-flight bunch of receivers to carve up opponents. The running game has started to round into form, too, in recent weeks.

On defense, however, question marks lined the field. After losing its entire starting front four to the NFL Draft — including Bradley Chubb, one of the best defenders in program history — NC State would have to learn on the fly, to some extent. How would this team respond to those departures?

The cancellation of the West Virginia (the No. 24 scoring offense in the FBS) game certainly makes the numbers look a little cleaner. However, NC State’s defense is currently a borderline top-25 unit in terms of Football Study Hall’s S&P, and it’s being led by a first-year starter that making a case for All-ACC status: Germaine Pratt.

New kids on the block

At cornerback, junior Nick McCloud has 18.5 tackles, an interception, three passes broken up and at least a dozen delightful celebrations.

Redshirt senior linebacker Germaine Pratt, a converted safety, has taken the biggest leap, though. As a reserve linebacker in 2017 — his first year playing the position — Pratt finished fourth on the roster with 69 tackles; he also became the first NC State defender to score two touchdowns in a season since David Amerson record-setting campaign in 2011.

This season, that’s been elevated to a whole new level.

Pratt back and watch

Through the six weeks of the season, Germain Pratt has compiled 49 total tackles — 9.8 per game, which is tops in the ACC. That includes three games — wins over James Madison, Marshall and Boston College — when Pratt has collected 11 or more tackles. Pratt also has 4.5 tackles for loss, which is a top-30 number in the ACC, and is tied for seventh amongst linebackers.

In the win over Boston College, NC State was sloppy with the ball on offense: four turnovers, including two interceptions from Finley. The Eagles scored three second half touchdowns but, for the most part, Pratt and State’s defense held tough.

Germaine Pratt was all over the field for NC State this past weekend – making our National Team of the Weekhttps://t.co/L4nLWYsKYw pic.twitter.com/LaSONryDFE