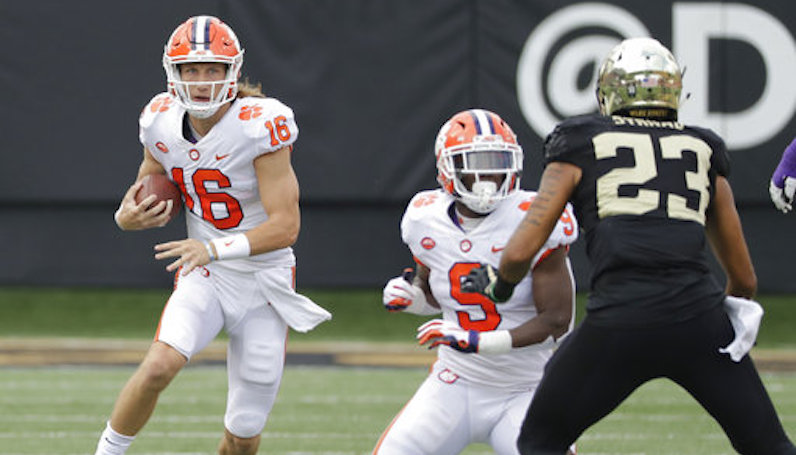 We now have a half-dozen weeks in the books for the 2018 college football season. It’s been an interesting one for the ACC (some ups, some downs), which has just three teams in this week’s AP Poll. Now, the table is set, two weeks from now, for a key matchup between Clemson and NC State (Oct. 20) in Death Valley.

Before that, though, let’s get to this week’s ACC Power Rankings.

The previous two weeks were seemingly chaotic for Clemson; however, the win over Wake Forest on Saturday was a return to normalcy. Trevor Lawrence (20-of-25 for 175 yards and two touchdowns) was decisive and accurate; behind him, three running backs — Travis Etienne, Lyn-J Dixon and Adam Choice — all ran for over 125 yards each and a touchdown.

Miami may have caught a break in that wild comeback win over Florida State but, man, that was fun to watch. When it gets things turned up, Miami’s defense — led by the front four — is nearly unstoppable. The Canes sacked Deondre Francois six times in this game, but that only tells a portion of the picture. Mark Richt was also rewarded for sticking with redshirt freshamn N’Kosi Perry (four touchdown passes) at quarterback.

Gerald Willis made sure his presence was known in the Miami-FSU game today pic.twitter.com/0nQmnJ4SGx

NC State struggled to take care of the ball in its narrow win over Boston College, suffering four turnovers and failing to cover the spread. On offense, though, the Pack was still prolific through the air; Ryan Finley hit Kelvin Harmon and Jakobi Meyers for a total of 19 completions on 21 targets (90.4 percent catch rate). NC State’s defense was also excellent, led by the ACC’s leading tackler, Germaine Pratt (9.8 per game).

Germaine Pratt was all over the field for NC State this past weekend – making our National Team of the Weekhttps://t.co/L4nLWYsKYw pic.twitter.com/LaSONryDFE

Two weeks from now: a massive road game at Clemson.

Under the lights of Lane Stadium, the Hokies hung tough for 30 minutes against Notre Dame — trailing just 17-16 at halftime. In fact, if not for a few first-half missteps in leverage moments, Virginia Tech could’ve had the lead at the break.

Despite the loss, wide receiver Damon Hazelton Jr. continued to shine: 12 catches on 16 targets for 131 yards and a touchdown.

The Eagle went +3 in the turnover column at NC State, but without star running back AJ Dillon (ankle), Boston College couldn’t quite find enough offense to pull out a win. Still, BC covered and had some nice moments on the road against a top-25 squad. Up next on the docket for BC: just what the doctor ordered.

Duke has taken three out of the last four against Georgia Tech (after losing the previous 10), including last season’s 23-point victory in Durham. In that game, the Blue Devils held Tech — by its own lofty standards — to only 277 yards rushing. Can Duke’s defense and Joe Giles-Harris limit a run game that went wild last Friday against Louisville?

So, uh, what happened here, you guys? Syracuse took its show on the road and, wow, things didn’t go well against Pittsburgh. The Panthers forced three turnovers, and went over 400 yards of total offense. Eric Dungey struggled, too. It feels like this lose hurt not only Syracuse, but also the overall perception of the ACC.

After a tough loss at NC State, Virginia is exiting its bye week and faces its toughest test of the season so far: Miami is in town. Can the Cavaliers offensive line protect Bryce Perkins against one of the best front sevens in all of college football?

On the surface, the loss at Miami is certainly a tough pill to swallow. With about 27 minutes to play, FSU was in business — up 27-7, with D.J. Matthews flying around, making plays. Then, in the span of about 10 minutes of game time, Miami’s defense woke up and N’Kosi Perry hit on three straight touchdown passes. That said, Florida State’s staff had this team ready to play in a game that they were heavy underdogs. This is something to hat their hat on.

The five highest-graded players from the Miami-FSU game on Saturday pic.twitter.com/KyqyCQCfeG

Georgia Tech took no prisoners last Friday against Louisville: 542 rushing yards (8.3 per carry) and eight touchdowns. In terms of total rushing yards, that’s the second most Georgia Tech has put up in a single game under Paul Johnson. The Yellow Jackets attempted just two passes in the win; going back to the 2000 season, this is the first time a Power Five team has attempted two or fewer passes in a game. And it worked.

After back-to-back losses over UNC and Central Florida, Pitt woke up at home against Syracuse. This was a massive win, led by running back Qadree Ollison, who went for 192 yards (second most in his career) and a touchdown on 24 carries.

However, I hope Pitt savored every second of the win because next Saturday: *gulp*

Next up: at Notre Dame

After suffering the program’s worst loss in 34 years at the hands of Clemson, Wake Forest gets a much-needed bye week. Star wideout Greg Dortch recorded just four touches from scrimmage against the Tigers, which went for a paltry 32 yards. That can’t happen.

Wake Forest’s offensive performance was just the second time this season an ACC team has gone for under 250 total yards and scored three or fewer points.

It’s tough to see the proverbial light at the end of the tunnel for UNC right now. After an extended break — following a dismal offensive showing at Miami — North Carolina will return to the field in primetime against Virginia Tech. After that, it’s at Syracuse and at Virginia. Right now, it’s just tough to see where the wins are going to come from for Larry Fedora. The Heels look poised for a 2-3 win season, which isn’t a good look, especially coming off a 3-9 campaign in 2017.

Silver lining: Jawon Pass had his best game in a Louisville uniform last Friday against Louisville. The reality: Louisville — without Lamar Jackson to cover things up — looks and feels rudderless, currently. After the shellacking against Georgia Tech, Louisville has lost three straight games with a point differential of -63. In that span, the Cards have allowed the three opponents to combine for over 1,300 yards of total offense.