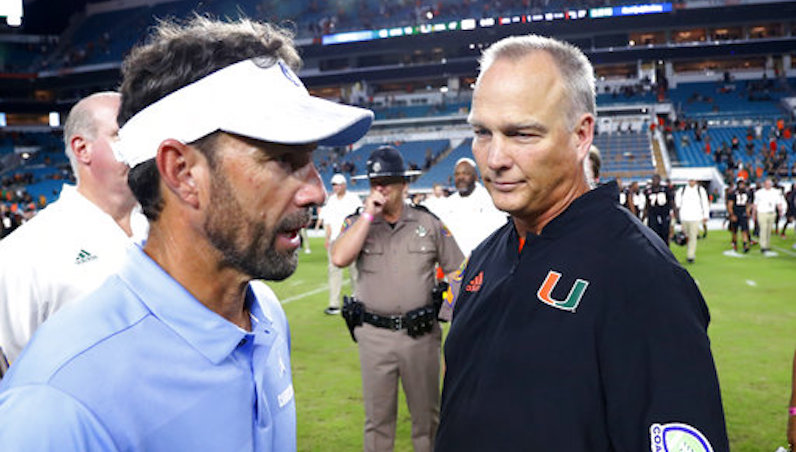 After a rough 2017 season in Chapel Hill, things haven’t gone much better for Larry Fedora and UNC football in 2018. The Tar Heels are just 1-3 with the lone victory coming at home against a struggling Pitt squad.

North Carolina has dealt with a bevy of suspensions, which has made things more challenging; however, it’s not just the record that’s tough. After the blowout loss at Miami, UNC has a point differential of -63 (in only four games); that ranks worst in the ACC by two touchdowns.

Who knows what that would look like if the game against Central Florida — the No. 7 scoring offense in the FBS — wasn’t canceled. Going back to last season, North Carolina has a point differential of -183 over its last 16 games.

Football Study Hall projects UNC to win only one more game this season — when the Heels host Western Carolina in mid-November. In five of North Carolina’s remaining six ACC games, Football Study Hall has UNC projected to lose by at least two touchdowns.

(In terms of cumulative wins, Football Study Hall has UNC pegged at 3.2.)

If this holds true, Larry Fedora and UNC could finish at 2-9. In over 100 seasons of football, North Carolina has just 12 seasons of two or fewer wins.

In terms of its catch-all team rating metric (S&P-plus), Football Study Hall had Fedora and UNC rated No. 53 before the season started. After the last month, North Carolina has experienced a quick backslide; currently, UNC ranks 90th nationally in terms of S&P-plus.

Team Rankings has UNC slotted as the No. 95 team in the FBS, and projects the Heels to win three games this season. Only three Power Five conference teams — Illinois (No. 107), Oregon State (No. 112) and Rutgers (No. 115) rank below North Carolina.

UNC has a bye week this Saturday, which follow the Thursday night content down at Miami. The Heels need to try and regroup this week because, going forward, there aren’t too many safe places. In the first three weeks after the bye, North Carolina hosts No. 24 Virginia Tech in primetime, then hits the road to play Syracuse and Virginia.

Time running out to turn around UNC football recruiting for 2019?