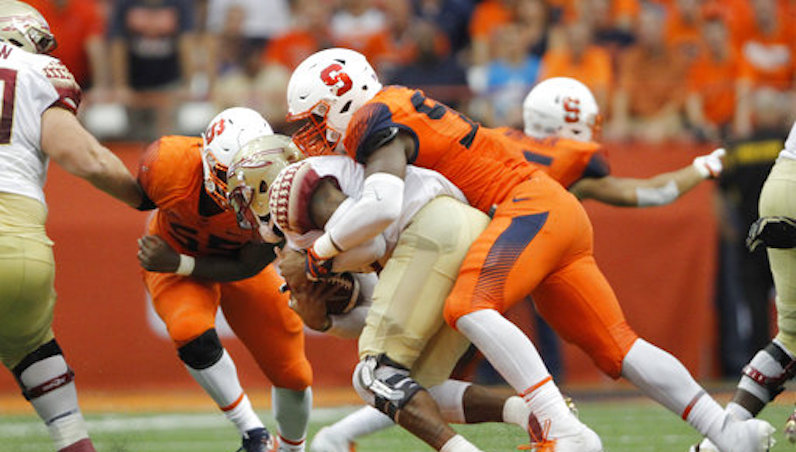 Here’s a look at our Week 3 ACC Football Power Rankings — after a slate of games that were partially interrupted by Hurricane Florence. To see how these compared with our power rankings from last week, check here.

At this point of the season, good luck figuring out the bottom-third of the league.

An injury to Kelly Bryant is the opposite of good news for Clemson — regardless of how productive Trevon Lawrence can be. Bryant’s status for Georgia Tech remains uncertain. Also: Travis Etienne rushed for a career-high 162 yards and two touchdowns against Georgia Southern. In the process, he became the second ACC player this season to rush for 10-plus yards per carry on a minimum of 15 carries in a game.

After the cancelation of this week’s game against East Carolina due to Hurricane Florence, Virginia Tech got an early impromptu bye week. Last season against Old Dominion — the first time the two programs played one another — VT won, big: 38-0. In that contest, the Hokies held the Monarchs to under 150 total yards; Josh Jackson completed 20-of-30 pass attempts for 298 yards and three touchdowns.

Next up: Old Dominion

The win over Toledo wasn’t exactly a work of team-dominance art, but No. 21 Miami still hun 49 points up on the road. Jeff Thomas continues to be awesome, and quarterback Malik Rosier threw for two touchdowns, and ran for three more. He became the first Miami quarterback to account for five total touchdowns since Brad Kaaya, back in 2016.

Next up: Florida International

Let’s maybe cool it on the Northeast Crimson Tide comparisons, but this team is good, and in the Eagles first ACC contest of the season, they excelled — besting Wake Forest in Winston-Salem, 41-34. AJ Dillon (33 carries, 185 yards, one touchdown) is the engine of this offense, but QB Anthony Brown had a career day against the Deacs: 16-of-25 through air for 305 yards (a career best) and five touchdowns (also a career best). He became the first ACC QB since John Wolford last October to through for 300 yards, five scores and no interceptions in a game.

Next up: at Purdue

The match-up with West Virginia was canceled due to Hurricane Florence, too. Up next for the Wolfpack: the first road game of the season, at Marshall. NC State leads the ACC in third-down conversation rate: 15-of-25 (60 percent). Marshall, on the other hand, has allowed opponents to convert 10-of-30 third-down plays (33.3 percent).

Next up: at Marshall

This was a statement win at Baylor without Daniel Jones and Mark Gilbert. Duke got after Baylor’s quarterbacks (two more sacks), and forced two turnovers, including an interception brought back by Leonard Johnson for a 53-yard touchdown. At quarterback, Quentin Harris completed just 40 percent of his passes, but hooked up with his wideouts for three touchdowns and no interceptions.

Teams with multiple road wins vs. Power 5 opponents: BYU (vs Arizona and Wisconsin) and Duke (vs Northwestern and Baylor).

Oh, this, too: it’s like that David Cutcliffe guy knows what he’s doing in Durham.

A couple of @DukeFOOTBALL notes after today's win at Baylor:

Next up: NC Central

There were a few head-scratching coaching decisions inside the five-yard line on offense — hence why Syracuse kicked three field goals of under 25 yards (this isn’t smart football). However, this was a dominant performance by Syracuse. In relief of the injured Eric Dungey (man, this dude takes a beating each game) Tommy Devito looked very good: 11-of-16, 144 yards (9 yards per attempt) and two total touchdowns.

Wake Forest, surprisingly, had serious issues in pass defense against Boston College, especially on vertical routes. That’s the second straight game the Demon Deacons have allowed over 300 yards passing, too. Sam Hartman’s two interceptions were back-breakers, and it took too long to get Greg Dortch involved — just one catch on four first-half targets.

Next up: Notre Dame

(NOTE: Now is when things start to get a little topsy-turvy at the ACC football offices.)

The win over Georgia Tech is a solid bounce-back performance after last week’s drubbing at the hands of in-state rival Penn State. Once a forgotten man in Pitt’s backfield, Qadree Ollison seems to have found new life; over the last two games, Ollison has combined for 38 carries, 210 yards (5.5 per carry) and three touchdowns. He’s now No. 5 in the ACC with 283 rushing yards on the season.

Louisville improved to 2-1 on Saturday, but the win over Western Kentucky shouldn’t inspire much confidence; this program still has a talent vacuum without Lamar Jackson. Jawon Pass was benched for Malik Cunningham after starting the game 0-of-3 with an interception. For the season, Pass is 28-of-56 (50 percent) for 341 yards (6.1 per attempt) and four interceptions.

Georgia Tech leads the FBS is rush yards per game (392.7), but it’s not materializing too much in the win column; the Yellow Jackets fell to 1-2 after the loss at Pitt. This is not great (Bob) with the Tigers of Clemson next on the docket.

Virginia went on the road — technically — and grab a victory over Ohio in Nashville. The Cavaliers continue to flash a promising pass defense: 195.7 yards per game, three interceptions and 17 pass break ups — tied for No. 1 in the ACC.

So, um, the start to the Willie Taggart era is not exactly off to a roaring start in Tallahassee. That was a winnable game Saturday at Syracuse, and FSU — unorganized and baffled by simple clock-management scenarios — simply looked inept trying to actually pull that off.

The offense doesn’t even have a chance with an offensive line that’s hopeless in protecting Deondre Francois, who has been sacked 10 times already this season (the most in the ACC), including four times against Syracuse, which actually undersells just how much he was under pressure.

Next up: Northern Illinois

NC State shows off another perimeter weapon in Thayer Thomas