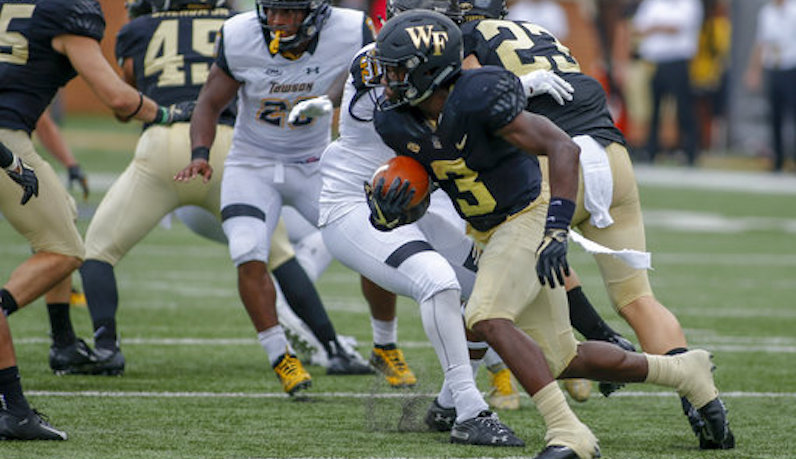 In terms of sheer entertainment value, there probably isn’t an ACC football player more enjoyable than Greg Dortch. The return of Wake Forest’s super-sophomore — after a wild, premature conclusion to his 2017 season — was met with great fanfare. Rightfully so, too.

So far — through just two games — Dortch has gone to work on shattering even the most optimistic of expectations.

Working with true freshman quarterback Sam Hartman, Dortch currently leads the ACC in receptions (19), yards (243) and yards per game (121.5). (A healthy Jakobi Meyers could make a different here, though.) He also leads the ACC with 30 targets, according to NCAA Savant (63.3 percent catch rate). It’s clear: Hartman knows where to go with the football.

Amongst FBS players to have played in at least two game so far this season, Dortch ranks second nationally with 9.5 catches per game. “Look, ma — one hand.”

Part of what makes Dortch such a dynamic talent, though: his all-purpose game. In Wake Forest’s 51-20 destruction of Towson, Dortch scored three total touchdowns, including two punt returns — which took place over the course of less than eight minutes of game action.

With that performance, Dortch became just the fourth ACC player to return two punts for touchdowns in the same game. Return god Devin Hester is one of those four (2004 vs. Louisiana Tech); however, the last player to accomplish this in the ACC: UNC’s Ryan Switzer, back in 2013 against Pitt. For his efforts, Dortch was named ACC Specialist of the Week.

In the win over Towson, Dortch hauled in seven passes on 12 targets, according to Pro Football Focus. Dortch had 94 receiving yards in the victory — half of which (47) came after the catch. He finished the game with 310 all-purpose yards, which is the third most in program history. Going back to last season, Dortch has four straight games with at least 200 all-purpose yards (lol).

Greg Dortch had an impressive outing yesterday with 47 of his total receiving yards coming after the catch pic.twitter.com/2n0A4tp1YY

According to Sports Reference, Dortch is the only FBS player so far this season with 100 receiving yards, 100 kick return yards and 100 punt return yards.

Now, that performance marks just 10 percent of Dortch’s total games while at Wake Forest. Considering his impact, it’s hard to believe he suited up just 10 times for the Demon Deacons. He’s yet to play even a full-season worth of games in Winston-Salem, but man, these numbers are awfully impressive.