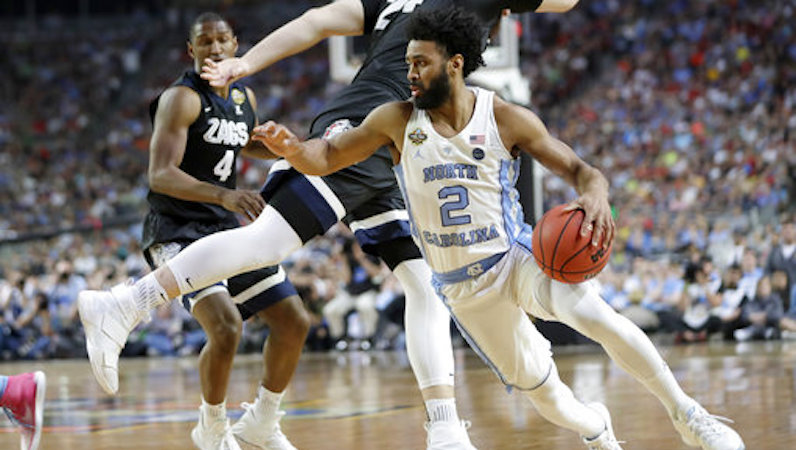 Joel Berry took another considerable step forward as a junior this season. But while is overall improvement was obvious, his consistency was also a major factor.

Justin Jackson is this team’s best player and top NBA prospect, but Berry was the catalyst. Those who followed the team knew the Tar Heels needed an elite Joel Berry to become a national championship contender.

More times than not, North Carolina got Good Berry. The results speak for themselves.

In fact, it is quite easy to make a case that Berry was an improved playmaker this season — even without the services of former teammate and dunk machine Brice Johnson. Berry posted an assist rate of 19.7 percent, which was a career best, and ranked third on the team (behind Theo Pinson and Seventh Woods) and No. 432 in the nation, per KenPom. That means when Berry was on the floor, he assisted on nearly one out of every five made field goals by his teammates.

It should be noted, however, that Berry’s assist rate did decline in conference play: 15.7 percent. His turnover rate also increased this season.

Last season, UNC scored 0.96 points per possession in these situations on 42.9 percent shooting. A reason for this improved efficiency on marginally worse shooting: more three-pointers.

Nearly 42 percent of Berry’s assists this year led to three-pointers. In 2015-16, 32 percent of his assists resulted in triples.

Berry slapped up another sterling season shooting from the field. While his free-throw percentage declined nearly 10 percent, Berry was sensational in other departments.

Berry shot 38.2 percent on three-pointers a season ago, which was crucial for a UNC squad that had a dearth of perimeter shooting. This season, Berry connected on 38.5 percent of his threes. That number took a late-season dive, too, as ankle injuries came into play. Berry shot just 24.5 percent from distance in North Carolina’s final eight games, although the four triples he splashed in the title game against Gonzaga are worth their weight in gold.

While Berry’s overall shooting percentage dropped to 42.8 percent this season, he improved in some less obvious ways. In jump shots that occurred off of the dribble this season, Berry connected on 29 percent of his attempts in the half court and scored 0.73 points per possession. Last year, Berry splashed 26.8 percent of his off-the-dribble jumpers and scored 0.59 points per possession.

It helps, of course, that more of Berry’s attempts came from beyond the arc. Nearly 54 percent of his field-goal attempts were three-pointers, compared to 45 percent from a season ago. A higher gain will yield better efficiency results. That can also explain why his catch-all shooting metrics — true shooting rate and effective field-goal percentage — were almost identical from one year to the next.

A glass case of emotion

Every now and then, we all need some alone time. Some of us, however, just happen to spend alone time in front of 20,000 screaming fans and millions more watching on television. As an isolation player, Berry made strides in 2017.

According to Synergy, close to 10 percent of Berry’s possessions were used via isolations. He scored 1.02 points per possession — a number that is nearly identical with Kansas’ Frank Mason III — on 45 percent shooting. Of ACC players to use at least 30 isolation possessions this season, Berry ranked third in overall efficiency — behind only Bryant Crawford and Jamel Artis. Last season, Berry shot just 32.1 percent on his iso possessions.

Berry did, however, regress as a shooter coming off of screens and handoffs. Despite the evolution of Pinson as a playmaker, Berry was counted on to create most of North Carolina’s offense. Marcus Paige was no longer in Chapel Hill to shoulder some of the ball-handling duties.

At this point, it does not really matter how Berry improved or regressed from one year to the next. Not only did he emerge as one of the best players in college basketball to a larger audience, but the Tar Heels are also NCAA Tournament champs.

Joel Berry was one of the primary reasons this team climbed the ladder in 2017. In the title game, Berry splashed all four of UNC’s made three-pointers and recorded just one turnover, despite playing 37 minutes and posting a team-high usage rate of 29 percent.

Even with two flat tires, Berry got the job done. This is why he was named the tournament’s MOP and will have his jersey in the Dean Dome rafters. What a year.

LISTEN IN: Roy Williams receives a congratulatory note from someone you might not expect