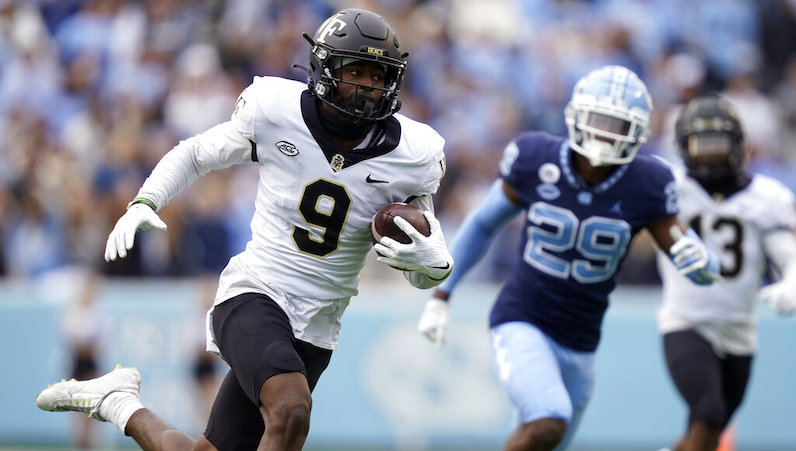 AT Perry was one of the ACC’s breakout stars of the 2021 football season. As he helped propel Wake Forest to 11 wins and an Atlantic Division title, the 6-foot-5 wideout finished No. 3 in the ACC in receiver yards (1,293) and yards per catch (18.2). Perry finished second in the conference in touchdown receptions, too: 15.

Perry finished the season as one of only six FBS receivers with 1,200 receiving yards and 18+ yards per catch. He was joined here by Dontayvion Wicks of Virginia and Alabama’s Jameson Williamson, the No. 12 pick in the 2022 NFL Draft.

Perry elected to return to Wake Forest for the 2022 season, once again teaming up with quarterback Sam Hartman. However, there were several programs the tried to lure Perry away from Winston-Salem, a tactic similar to what Boston College receiver Zay Flowers experienced.

NEW: Star BC WR Zay Flowers tells @ESPN he turned down a pair of six figure offers via NIL companies — $600,000 to one school and $300,000 to another — to enter portal and transfer. He explains why he stayed loyal to BC for his senior year: https://t.co/CdnSgzNwvB

Late last week, ESPN’s Pete Thamel reported that at least two NIL companies offered Flowers, an All-ACC performer, significant money to transfer out of Boston College. According to Thamel, those deals ranged from $300,000 to $600,000. Flowers is one of the top wide receiver prospects for the 2023 NFL Draft.

He told ESPN this week that in the three or four days prior to the May 1 portal deadline, he received multiple six-figure offers via intermediaries from name, image and likeness companies to enter the portal and transfer. He said he was told NIL companies would give him $600,000 to transfer to one school and there was another deal that would give him $300,000 to go to a different school. Flowers had not entered the NCAA transfer portal, nor given any public indication he intended to.

Ultimately, Flowers elected to return to BC for one more season.

Obviously, this isn’t an isolated incident. Last week, Pitt football and star receiver Jordan Addison — ahead of the May 1 transfer portal/eligibility deadline — entered the portal. Addison, the 2021 Biletnikoff Award winner, led the ACC in receiving yards (1,593) and touchdowns (17) last season. It was reported that USC was a likely destination, with the help of a substantial payout from another NIL company.

So, Addison and Flowers — to varying degrees of success — were both targeted by NIL companies backing seemingly more prominent and glamorous Power 5 programs. The same seems to be true of Perry.

You can bet on plenty of NIL discussion. We will ask Jeff Hafley about Zay Flowers turning down $ to return, but I bet every team has had a similar situation. It’s my understanding people were reaching out to WR AT Perry in a similar manner and he didn’t want to leave Wake Forest

All of these developments detail both a new reality in college athletics — NIL is a game-changer — and the importance of culture. It’s notable, yet entirely unsurprising, to see featured players in Power 5 leagues targeted as transfer prospects.

On one hand, coaches like Hafley and Clawson should take pride in what they’ve built. This may not be the case for every player, but (in this case) two high-profile players stared down big paydays to leave and still decided to remain at their current programs. And on the other hand — oh, boy — this new form of free agency in college athletics is wild to witness.

This isn’t intended to clutch pearls; it’s objectively good for athletes to have agency over their careers. They can/should exercise their rights however they see fit.

As far as NIL goes, well, it’s far from perfect. Division I athletes still don’t make any money off the enormous profits they generate for universities, conferences and television partners. At the least, NIL serves as buffer of sorts, bucking against the antiquated system of amateurism.

The murkiness for how NIL money is distributed or enforced may seem comical. For the time being, that’s just the reality of college athletics in 2022. Of course, any blame or frustration for the Wild West Approach to NIL should be directed at the NCAA, a toothless organization that — for decades — fought against even incremental progress in college athletics.

Read More on AT Perry and ACC Football