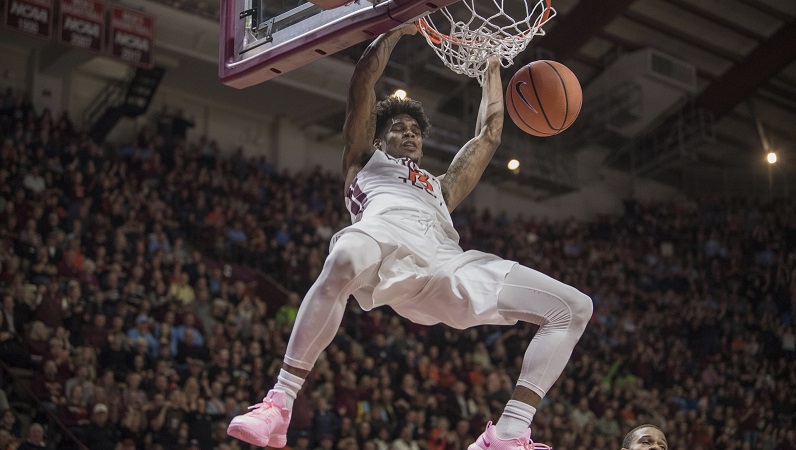 Virginia Tech has played well enough through the first half of the ACC schedule to earn consideration for a bid to this year’s NCAA Tournament. But can Buzz Williams’ squad maintain their solid play over the next month in order to return to the field of 68 for a second straight season?

At the midpoint of the ACC regular season schedule, the Hokies were 5-4 in league play. At 16-6 through their first 22 games, the Hokies could finish out the regular season losing more than they win, and still reach 20 victories. Given who VT still has to play, that’s a very possible potential scenario.

The Hokies have a brutal schedule down the stretch. Between Feb. 7 and Feb. 26, the Hokies will host NC State, Clemson, Louisville, and Duke in Blacksburg. All four schools remain in the hunt for NCAA Tournament berths. VT also must travel to Virginia, Duke, Miami, and Georgia Tech.

While that gauntlet of games could ruin Virginia Tech’s postseason hopes, it could also serve as great preparation for March. If the Hokies can hang tough and win five or more of their remaining games, they’ll not only return to the Big Dance. They’ll be positioned for a decent seeding, and won’t have to play in Dayton in the opening round, as ACC rival Wake Forest did last season.

Offensively, Virginia Tech has emerged as one of the more potent teams in the ACC this winter. The Hokies ranked third in the league through 22 contests with an average of 85.1 points per game. VT leads the ACC in shooting percentage (51.3 percent), and 3-point shooting percentage (40.2 percent).

The Hokies haven’t been nearly as strong defensively, particularly defending near the basket. VT ranks dead-last in the ACC in blocked shots, with an average of just 2.5 per game. They’re also in the bottom third of the ACC in rebounding.

If the Hokies can continue shooting at a high level while stepping it up around the glass, particularly defensively, they have the ability to play through their upcoming slate and win enough to stay in the NCAA Tournament discussion. But the Hokies need some marquee victories in order to improve their NCAA resume. The Hokies’ upcoming schedule plays well in that regard. VT’s most prominent win thus far is a home win over North Carolina, a program that was in free fall in late January.

Given its demanding late-season slate, Virginia Tech’s NCAA hopes could very well depend on how it does at the ACC Tournament. The Hokies cannot afford to go to Brooklyn and lay an egg, getting knocked out in their first contest.

Virginia Tech needs to finish in the top nine of the ACC regular season standings to have any realistic shot at all to make the NCAA Tournament. But finishing in the top nine would also allow VT to avoid the dreaded Tuesday opening round series of games at the Barclays Center. As a ninth or higher seed at the ACC Tournament, the Hokies would have the benefit of playing a lower-seeded team on Wednesday. A team that had to play the day before, in what amounts to a must-win for Virginia Tech. Pulling an upset in the quarterfinals and reaching the semifinals of the ACC Tournament should settle the issue for the Hokies as far as reaching the NCAAs

Read more: Why VT’s Kerry Blackshear may be the ACC’s Most Improved Player