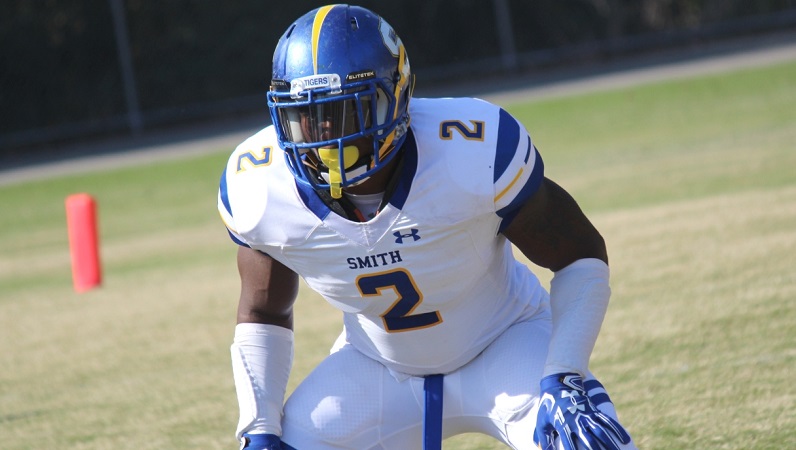 A total of 20 FBS programs offered Blacksburg running back Cole Beck before Virginia Tech finally pulled the trigger on the speedster in August.  Two months later, he announced that he will play football and run track for the Hokies.

Beck, who led Blacksburg to a state title in 2015 after rushing for 2156 yards and 35 touchdowns, took official visits to North Carolina and Pittsburgh.  Both seemed to be in serious consideration, as well as East Carolina and Louisville before he cut the Pirates and Cardinals from his list.

But Beck called it a, “dream come true,” to play for Tech.  His uncanny speed may not only be put to use in the backfield as it could come into play sooner than later on special teams in the return game.

There may not be a faster player in Virginia Tech’s recruiting class than Beck, who played second in the 100-meter dash at the New Balance Outdoor Nationals track and field meet in Greensboro with a time of 10.41 seconds.

There’s no resting on his past accomplishments either.  With his Blacksburg team at 10-1 overall and getting ready for a second round playoff matchup, Beck is rumored to be one of the leading candidates for the prestigious Gatorade State Player of the Year award that is expected to be announced in December.

Getting a top-notch talent from the Tidewater area they once dominated in recruited and strengthening the linebacker core for the future were two priorities for Virginia Tech.

The Hokies covered both with one pledge in the middle of November when Chesapeake (VA) linebacker Keshon Artis.

Rated a 4-star prospect by ESPN, Artis selected the Hokies over finalists Central Florida and NC State.  At Virginia Tech, he plans to pursue a degree in computer science.

Some feel that the 6-foot-tall, 227-pound ‘backer lacks the typical size to dominate the position, but he’s been quite productive at his school with 78 total tackles – 49 of the solo variety – and 30 of them coming behind the line of scrimmage through 11 games in his senior season.  Artis was recently named the Southeastern District Defensive Player of the Year and seems to be in position to earn First Team All-State honors for a second straight year.

His current school, Oscar Smith, has sent some talent to the Hokies in recent years, most notably quarterback turned tight end Greg Boone as well as running backs J.C. Coleman and Deshawn McClease.  Many believe he was the best linebacker left on the board in-state once Teradja Mitchell of Virginia Beach and Dinwiddie’s K’Vaughan Pope both opted to flee the Commonwealth for Ohio State.

Artis became the 23rdd player in the Class of 2018 to pick the Hokies and just the second from the ‘757’ area code, joining Virginia Beach WR/DB Armani Chatman.