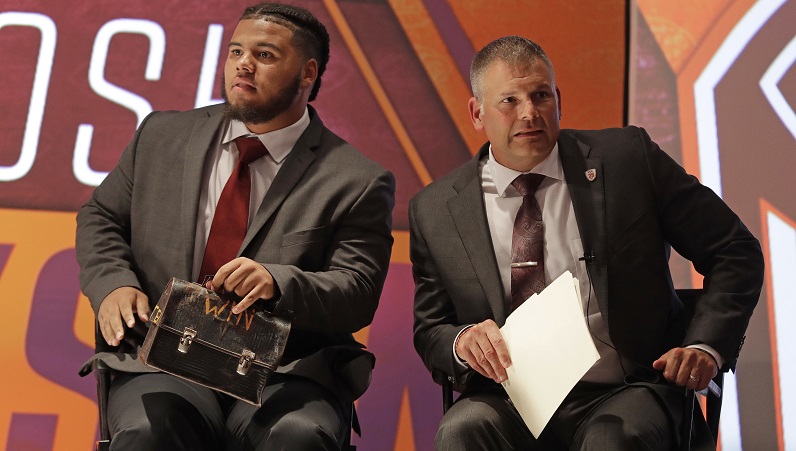 If Virginia Tech is to reach a 26th consecutive bowl game and challenge for a Coastal Division championship this fall, the Hokies will have to do so with an almost entirely-rebuilt defense.

While they have some continuity along the defensive line, defensive coordinator Bud Foster has to replace almost the entire back seven. The situation recently got even worse, when news broke that Mook Reynolds was being dismissed from Virginia Tech.

“I can tell you that he (Reynolds) is not playing for us this year,” Virginia Tech head coach Justin Fuente said at the ACC Media Days in Charlotte. “In the spring, we were not on good terms. And we’re gonna move on. I hate it. But I can’t compromise what we’re trying to accomplish on a daily basis. I tell kids all the time, you can’t put me in a position to choose between you and the team. Because I’m gonna choose the team every single time.”

But don’t anticipate lowered expectations in Blacksburg despite all the defensive losses.

“In Blacksburg, there’s no such thing as rebuilding,” veteran defensive tackle Ricky Walker said. “As long as Coach Fuente and Coach Foster are there. We recruit very well, and have those guys prepared and ready to play. Coach Foster preaches all the time, ‘You’re one play away from being the guy.’ And I think those guys do a great job of preparing. In Blacksburg, there’s no rebuilding years.”

Continuity on the front line

The defensive line is the clear returning strength of the Hokie defense in 2018. Despite all the losses in the secondary and among the linebacking corps, VT returns much of its defensive line intact with exception of defensive tackle Tim Settle.

“That’s my dog – big Tim Settle,” Walker said. “That’s my man. I was excited and happy for him. But we’ve got guys that are ready to step in, and who played last year, like Vinny Mihota, Jarrod Hewitt, Xavier Burke. Outside, we’ve got Trevon Hill. Houshun Gaines is gonna start. We have got Emmanuel Belmar, a redshirt sophomore. It’s time for him to turn that notch. I’m excited for those guys. Those guys are ready to step in right now, as we speak.”

Hill is Virginia Tech’s top returner as far as sacks from last season, but he’s also shown athletic ability beyond getting after the quarterback. On top of recording a forced fumble and two fumble recoveries, Hill also intercepted a pass last season against West Virginia.

“He’s played a lot of snaps, and he’s got a lot of talent rushing the passer. He’s got a chance to be a productive player,” Fuente said of Hill.

Safety Reggie Floyd is Virginia Tech’s top returner in the secondary, and the only player among the Hokies’ top five tacklers in 2017 to be coming back. Divine Deablo, who missed most of last season with an injury, looks to join Floyd as the other starting safety. Devon Hunter will provide additional depth at the safety position.

Floyd is coming off a solid sophomore season, in which he recorded 72 tackles and three interceptions. The Hokie coaches are looking for Floyd to emerge as the vocal leader of the VT secondary in training camp.

“He’s gonna have to shoulder some leadership,” Fuente said of Floyd. “That’s what we’ve been trying to get out of him. I wasn’t quite honestly, very happy with him embracing that in the spring. But I have been more pleased with him through the summer, and hopefully that can continue. We need him to do that. He’s the most experienced guy in the back end now. So he needs to step into that role, and not be the silent guy anymore.”

Virginia Tech will be particularly raw at cornerback heading into the 2018 season. The dismissal of Mook Reynolds and the midsummer departure of Adonis Alexander left the Hokies without two veterans and projected starters at the position. Then news broke that transfer Jeremy Webb suffered an injury and would be out for the season.

Bryce Watts, who recorded five tackles and a pass deflection in five games last season, now steps into a starting role at cornerback. Caleb Farley is a candidate to replace Reynolds as the other starter, as are several other young players. But cornerback remains the biggest unknown on the team heading into August.

“You can’t totally avoid one-on-one situations in the back end,” Fuente said. “I feel really good about what we’ve got. We have some young, long, athletic tough guys that would like to play. They all told me they wanted to play early. So here’s your chance. I think they have talent. They’ve just never done it. They haven’t played. If we can get some of those guys that are returning mixed with some of the new guys, and bring some of the other guys along, then I think we’ll have a chance.”

“We’ve got two new corners,” Walker added. “(Opposing) receivers should definitely be licking their chops. But the quarterback also has to get the ball off. And they’ll have guys like me coming at them.”

At linebacker, where the Hokies are replacing the Edmunds brothers, as well as Motuapuaka, youngsters such as Dylan Rivers and Rayshard Ashby are eager to step in. Rivers saw action in one game last season as a freshman, recording two tackles, while Ashby contributed heavily on special teams.

Another linebacker who figures to play a key role for the Hokies this season is the highly-touted Dax Hollifield, who arrived in Blacksburg following an intense recruitment. Hollifield is poised to step in and provide a meaningful impact for Virginia Tech as a true freshman, and could challenge for a starting job right out of the gate.

“I haven’t seen him practice yet,” Fuente said of Hollifield. “I know he’s been doing our freshman workouts, which they’re not even incorporated into the varsity yet. I know he’s done well with those. He’s a physically developed guy in terms of — he didn’t necessarily look like a true freshman from a physical standpoint. He’s a highly intelligent player. I would anticipate that he would have the opportunity to play (right away). It would be probably unwise for me to make a blanket statement that he is or isn’t (gonna play) before I’ve ever seen him practice. But I’m encouraged by the feedback we’ve gotten from our strength coaches about where he’s at, and I’m looking forward to getting to work with him.”

“He’s a few weeks in, and I got a chance to watch him do little skills and drills, and so far he’s a bull,” Walker added of Hollifield. “ He looks like a bull. He’s flying around hard, and so far he knows the calls, and I’m excited about that, because as a linebacker that’s important on our defense. I think he’s going to help us out tremendously defensively and on special teams, so I’m excited for him.”