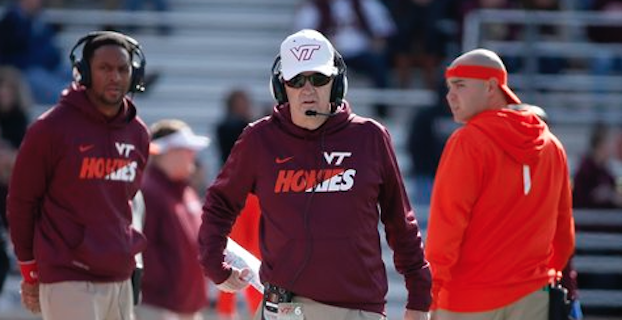 “I have always said that ‘I want what is best for Virginia Tech,’” Beamer said. “Because of my love and passion for this great university, this program and our tremendous fans, I have decided after 29 years that it’s time. Today, I informed Dr. Timothy Sands and Whit Babcock of my decision to retire at the conclusion of the 2015 season.

“I was going to wait until the end of the season to make this announcement, but I’ve always believed in being open and honest with my players and coaches. I know Hokie Nation will continue to give our players and our coaches their full support in these last three games, and hopefully through a bowl game. I will be forever grateful to everyone who made these past three decades the best years of my life. It’s an emotional day for me and my family. I am so honored and humbled to have served as your head coach.

“I will speak about my retirement at my regular press conference tomorrow, and after that, my sole and absolute focus will return to coaching these players as best as I can and encouraging our coaches and staff who I care for so deeply.”

Beamer owns a 277-143-4 (.656) career head coaching record in 35 seasons, including a 235-120-2 (.661) mark during his 29 years at Virginia Tech. His 277 career wins are the most of any active FBS coach and are sixth all-time in the FBS. But perhaps two of his most notable accomplishments are the fact that 100 percent of his senior football student-athletes have graduated dating back to 2012 and that 25 different sets of brothers have played for him at Virginia Tech.

A 1969 graduate of Virginia Tech, Beamer was a three-year starting cornerback for the Hokies and was a member of the school’s 1966 and 1968 Liberty Bowl squads. After taking over as the Hokies’ head coach in 1987, he built the football program at his alma mater into a national power. He has guided the Hokies to 22 consecutive bowl games, the longest active streak recognized by the NCAA. A former defensive back for Virginia Tech, Beamer’s No. 25 jersey was retired by the school in 2002. On Aug. 6, 2015 the Virginia Tech Board of Visitors officially renamed Spring Road in front of Lane Stadium as “Beamer Way.”

“Coach Beamer contacted me earlier today with his decision to retire following this season,” Virginia Tech Director of Athletics Whit Babcock stated. “Coach will always remain one of the most beloved figures in college football history. He’s a future Hall-of-Famer, an educator and a role model. His contributions to Virginia Tech and the game of football – both on and off of the field – are unquestionable and beyond measure.

“It’s been an unbelievable honor and privilege for me to work with the winningest active coach in college football for the past two years. Like the hundreds of players and the thousands of lives he has touched and impacted in such a positive and profound manner over his life and career, he has positively impacted mine as well and I am a better athletic director for it.

“He coached the game the right way and no one coached it better, no one. You cannot ‘replace’ Coach Beamer. What an amazing run it was over the past 29 years! He will be missed on the sideline, but he and Cheryl will always be part of the Virginia Tech family.

“Moving forward, first and foremost, we will focus our efforts on supporting Coach, his staff, and most importantly our students who play football, in order to finish this season on a high note. I’m confident the Hokie Nation will rally around them and do the same. Coach will lead our program through the remainder of the season and hopefully in a bowl game for the 23rd consecutive year.

“Today is about Coach Beamer and celebrating all that he and his staff have meant to Virginia Tech. Once the regular season is completed, I will speak about our search and finding the next great leader for our program. That is for another time. Today is both a sad and proud day for the Hokie Family. We will stay strong, together.”

Beamer’s legacy as one of the game’s most influential coaches will be marked by consistently stellar special teams play and exceptional defense. The Hokies have blocked 136 kicks (67 punts, 41 field goals and 28 PATs) during his tenure. Dating back to 1996, no Power Five program has registered more sacks (740.0) or interceptions (335). Since the start of the 1995 season, Ohio State (15) is the only Power Five program that has produced more seasons with 10 or more victories than Virginia Tech (13). A total of 93 Virginia Tech players under his tenure have been drafted by the National Football League, while numerous others have signed NFL free agent contracts.

Beamer guided the Hokies to four ACC titles (2004, 2007, 2008 and 2010), five ACC Coastal Division crowns, three BIG EAST Conference titles, two “major” bowl victories, six BCS appearances and a trip to the 1999 national championship game. Tech won the BIG EAST title in 1995 and 1999, and shared it in 1996. The Hillsville, Virginia, product was voted BIG EAST Coach of the Year by the league’s coaches each of those seasons and was tabbed the Atlantic Coast Conference Coach of the Year in both 2004 and 2005. Following the 1999 season, he earned eight national coach of the year honors.

“Over the past three decades, Virginia Tech and Coach Beamer have transformed the university and the football program together and have created a legacy on which we will continue to grow,” said Virginia Tech President Dr. Timothy Sands. “Coach Beamer built our football program into a consistent winner through continuous innovation, a relentless work ethic and a commitment to integrity, while Virginia Tech was becoming a major research university with global reach.”

“Virginia Tech and our football team share these values,” Dr. Sands continued. “The spirit of ‘Ut Prosim’ (That I May Serve) and the strong community we call Hokie Nation have created a special bond between our university and its football team, a result that would not have been possible without Coach Beamer’s leadership through his words, but most importantly, through his integrity and actions.

“Laura and I want to thank Frank and Cheryl Beamer for their many contributions and we look forward to celebrating the indelible contributions of these remarkable Hokies.”

Beamer’s illustrious coaching career began as an assistant at Radford High School from 1969 through 1971. Then, after one season as a graduate assistant at the University of Maryland, he went to The Citadel where he worked five seasons under Bobby Ross and one year under Art Baker. His last two years at The Citadel, Beamer was the defensive coordinator. In 1979, he went to Murray State as the defensive coordinator under Mike Gottfried. He was named head coach at MSU in 1981 and went on to compile a six-year record of 42-23-2.

He is married to the former Cheryl Oakley of Richmond, Virginia. They have two children, Shane, a former member of his father’s football team at Virginia Tech and now the associate head coach/running backs coach at Virginia Tech; and daughter Casey, a 2003 graduate of Tech. He has four grandchildren, Sutton, Olivia and Hunter, children of Shane and his wife, Emily. Casey, who married former Virginia Tech wrestler Canaan Prater in 2012, had her first son, Hudson, in February.

Beamer was born in Mt. Airy, North Carolina, and grew up in Hillsville, Virginia. At Hillsville High, he earned 11 varsity letters as a three-sport athlete in football, basketball and baseball.