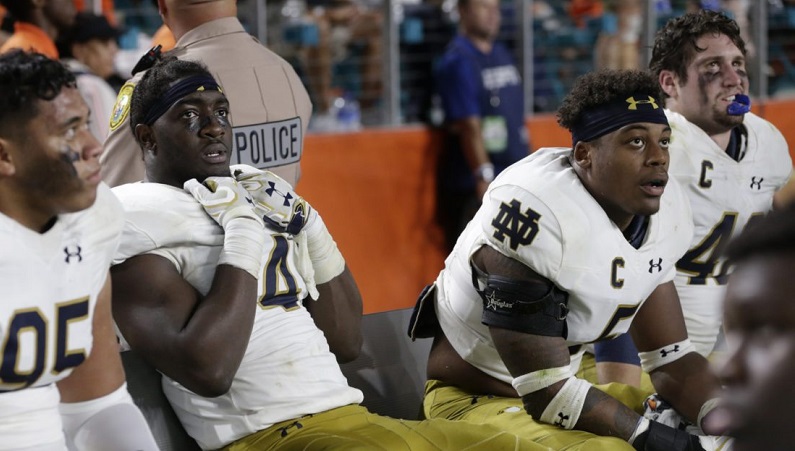 As Notre Dame prepares for another defensive coordinator switch this spring – it’ll be the third in three years for the Fighting Irish – the program received some good news in mid-January. The Irish will be getting back veteran linebacker Te’von Coney and defensive lineman Jerry Tillery for the 2018 season.

Coney led the Fighting Irish in tackles this past season, while Tillery led the team in sacks. Coney only made seven starts but produced 116 tackles, including 17 in the Citrus Bowl win over LSU. Tillery finished sixth on the Irish in tackles, with 56, and was a disruptive presence all season up front for the Irish defense.

Notre Dame wound up with the services of Mike Elko for only one year, as the defensive coordinator left South Bend for Texas A&M for a reported $1.8 million a year.

Elko’s departure can be attributed to two primary factors – big money, and the chance to compete for national championships in the SEC. Texas A&M is going all in with Jimbo Fisher, and are giving him the resources to take on Alabama. Although Notre Dame can keep its coaches’ salaries private, there’s no question that this marks a dramatic raise for Elko. The $1.8 million would have made him the highest-paid assistant nationally in 2017. Only LSU defensive coordinator Dave Aranda currently makes more.

Elko did a solid job improving the Fighting Irish defensively after a dreadful 2016 season, which resulted in the firing of Brian VanGorder. Notre Dame’s defense improved statistically in 2017, as the Irish went from allowing 378.8 yards per game in 2016 to 369.2 yards per game. Opponents went from gaining 5.4 yards per play against the Irish in 2016, to 5.05 this past fall. Perhaps most impressively, the Irish went from allowing 27.8 points per game in 2016, to 21.5 points per game this past season. It all resulted in a turnaround from 4-8, which put Brian Kelly on the hot seat, to a 10-3 finish in 2017.

The Irish were quite stingy on the scoreboard through the first half of this past season. And it wasn’t cupcake opponents the Irish were holding down the scoring against. National finalist Georgia scored only 20 points against the Irish – UGA’s lowest single-game scoring total all season. Notre Dame allowed Southern Cal and NC State 14 points each during a solid home stretch in late October.

In fact, the Irish didn’t allow more than 20 points in a game until Wake Forest dropped 37 on them in early November. This began a downward trend that resulted in the Irish giving up 41 points to Miami the following week, and 38 points to Stanford on Nov. 25, which skewed their overall defensive numbers lower.

Lea’s challenge as a first-year offensive coordinator at a high-pressure place like Notre Dame would have been much more difficult without Coney and Tillery. But now Lea can settle in a little more comfortably with additional veteran leadership, and more capability on the field. There will be a lot of continuity with the Irish defense this spring. They will employ similar, if not identical, schemes and play formations from this past season. Most of the same players will be on the field. Defensive continuity will be an ongoing theme with the Irish defense until they take on Michigan the night of Sept. 1 in South Bend.

Read more: Is 2018 a make or break season for Brian Kelly?