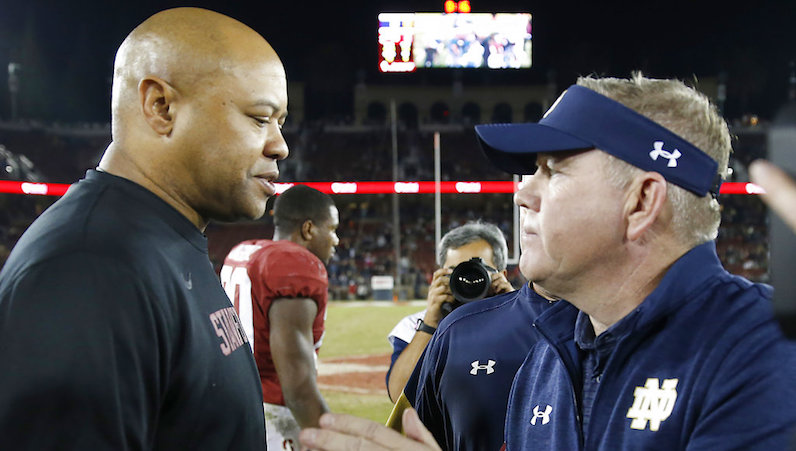 Brian Kelly did what he had to do this fall to earn a ninth season in South Bend. But will it be enough to save his job if the Irish take another step backwards in 2018?

Coming off a 4-8 season that had him firmly on the hot seat heading into 2017, Kelly lured Mike Elko away from Wake Forest and Mike Long from Memphis. The new coordinators injected life into what was a talented but underachieiving group. The result was a 9-3 regular season that saw the Fighting Irish in the College Football Playoff conversation as late as early November.

Up until the Miami game, it was shaping up as another potential storybook season. The Irish reeled off a seven-game winning streak that included four victories over ACC opponents. In early September, Notre Dame hosted Georgia and dueled the College Football Playoff-bound Bulldogs to a 20-19 final score.

The UGA loss didn’t hurt Notre Dame’s Playoff chances. But Kelly’s squad got blown out on the road at Miami and Stanford in two of its last three outings, relegating the Irish to yet another disappointing finish.

9-3 is a regular season that most programs would gladly take on a yearly basis. It would, in fact, mark Kelly’s second-best regular season finish since coming to Notre Dame. The Irish went undefeated in the regular season in 2012 before losing to Alabama, and went 10-2 in 2015 prior to a Fiesta Bowl setback to Ohio State.

But with Notre Dame’s fanbase and leadership eager for a trip to the College Football Playoff to justify its independent status, the clock is ticking on Kelly to deliver. His window of opportunity to restore the Fighting Irish to the top of college football is shrinking by the year.

Although Kelly’s .667 winning percentage is the best for a Notre Dame football coach since Lou Holtz, he hasn’t brought a national championship to South Bend. In that regard, Kelly is no better than Bob Davie, Tyrone Willingham, or Charlie Weis in the eyes of many Fighting Irish fans.

It should be noted, too: Kelly and Notre Dame agreed to a six-year contract extension in early 2016. The deal runs through 2021.

For Kelly to earn his tenth season with the Irish in 2019, he cannot afford to have a season anything resembling 2016 this coming year. Another 9-win season in 2018 may not get Kelly fired. Anything less will probably put his job in jeopardy.

Inside The Playbook: Mike Brey proves that not all heroes wear capes