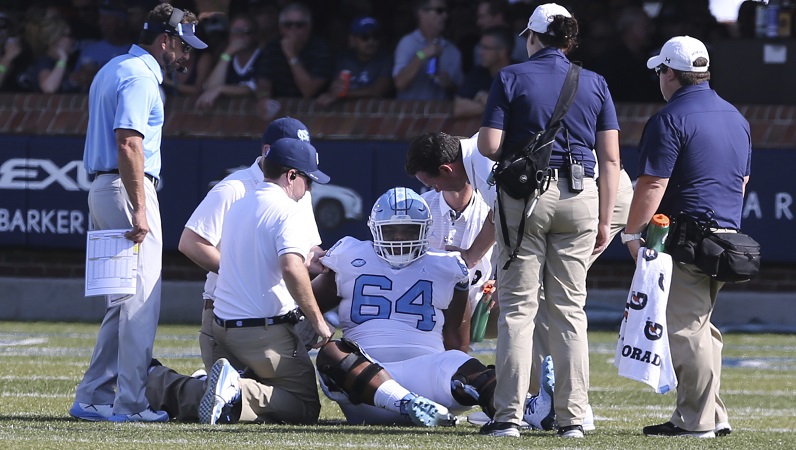 North Carolina's Khaliel Rodgers is tended to my medical personnel in the first half of an NCAA college football game against Old Dominion, Saturday, Sept. 16, 2017 in Norfolk, Va.

Injuries were an ongoing concern for North Carolina throughout the 2017 season. The Tar Heels’ already-thin depth was decimated by ailments, and the offensive line took its fair share of the punishment.

Over the course of the season, UNC lost offensive tackle William Sweet to an ACL tear, while interior lineman Tommy Hatton was forced to retire from the sport due to recurring concussions. In addition, redshirt freshman offensive lineman Luke Elder, who survived a cancer scare as well as an ACL injury in high school, missed the entire season with an undisclosed injury.

As the Tar Heels worked through spring workouts in March and April, Sweet was unavailable as he continued to rehabilitate his injured knee. Sweet is projected as UNC’s starting right tackle heading into the upcoming season. And since he suffered his knee injury early on last fall – in mid-September at Old Dominion – Sweet will have a reasonably good chance of getting back on the field by August.

Charlie Heck is UNC’s projected left tackle, while Nick Polino and Jonah Melton are battling at left guard. Melton dealt with an ACL tear that forced him to miss his senior season at Eastern Alamance High School in nearby Mebane back in 2016. A couple of inexperienced scholarship players – sophomore Tyler Pritchett and redshirt freshman Billy Ross, are competing at the right guard position. All five of those players managed to stay mostly healthy during the spring.

Jay-Jay McCargo is anticipated to be UNC’s starting center after making one start in 2017 as a redshirt freshman. But McCargo was out through the spring alongside Sweet. Between the two, McCargo and Sweet have made five career starts. But the Tar Heels are losing a combined 114 starts along the offensive line from last season, including the departures of Bentley Spain, Khaliel Rodgers, Cam Dillard, and R.J. Prince.

With Sweet and McCargo out of the rotation, opportunity was provided this spring to fourth-year junior Mason Veal at right tackle, along with inexperienced players such as redshirt freshman Brian Anderson at center, and walk-on Jonathan Trull at center and guard.

The Tar Heels have the benefit of scholarship depth at tackle and guard, and a decent collection of heavily-recruited prospects to work with. But most of them are lacking experience. Training camp will be essential for this unit in terms of repetitions. By that time, UNC should have McCargo and Sweet back.

Things will already be challenging for UNC up front in 2018 with the departures of offensive line mainstays such as Spain and Prince. But if the injuries pile up like they did last season, this unit will be strained to the max.