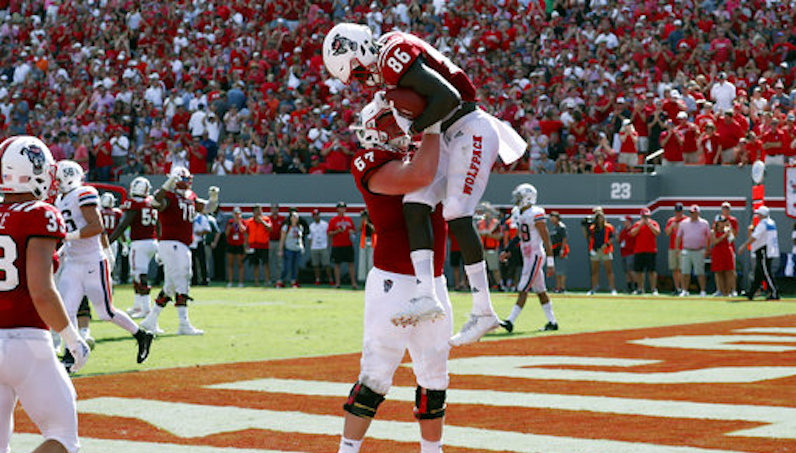 Currently, NC State and Minnesota project as the two frontrunners for Cooley, although he recently visited Ole Miss, too. Cooley is set for an official visit next weekend at UNC.

According to 247 Sports, Cooley is a Top 25 prospect in the state of North Carolina and a borderline Top 100 receiver.

Tamarcus Cooley's recruitment changed this spring when his patience paid off with an avalanche of offers.

NC State is the hometown team for the Rolesville star, and @CooleyTamarcus talks about his recruitment with the Wolfpack here: https://t.co/OCeGwM1oqO

Cooley plays his prep ball for Rolesville (NC) High, the same program as 4-star wide receiver Noah Rogers, the top prospect on NC State’s recruiting board for 2023. Rogers is a Top 50 prospect in the class.

Rogers was set to take his official visit to Ohio State this weekend; however, some reporting earlier in the day on Friday (June 17) noted that there were travel issues up to Columbus and that Rogers would take the visit at a later date.

More rumors then placed Rogers on NC State’s campus, although we can’t confirm that status of that visit. Regardless, Rogers apparently made it back up to Columbus, after all, and the visit will still take place.

Rogers will also take a visit to North Carolina next week.

At the recent Overtime OT7 event out in Las Vegas, Rogers stated that those three programs — Ohio State, NC State and UNC — are his current leaders. Rogers also informed 247 Sports that he plans to make his commitment decision before the start of the 2023 seasons — possibly before the end of June or July.

Knocking off Ohio State will be a tall task for either UNC or NC State. North Carolina does, however, have his older brother, Cyrus Rogers, on its roster, too. Rogers, a 2021 recruit, is a redshirt freshman receiver.

Meanwhile, NC State has a 2023 commitment from 3-star quarterback Lex Thomas, a close friend of Rogers, who hails from nearby Wake Forest. Thomas is the younger brother of NC State standouts Thayer Thomas and Drake Thomas. Thomas took his official visit to NC State on June 17, too.