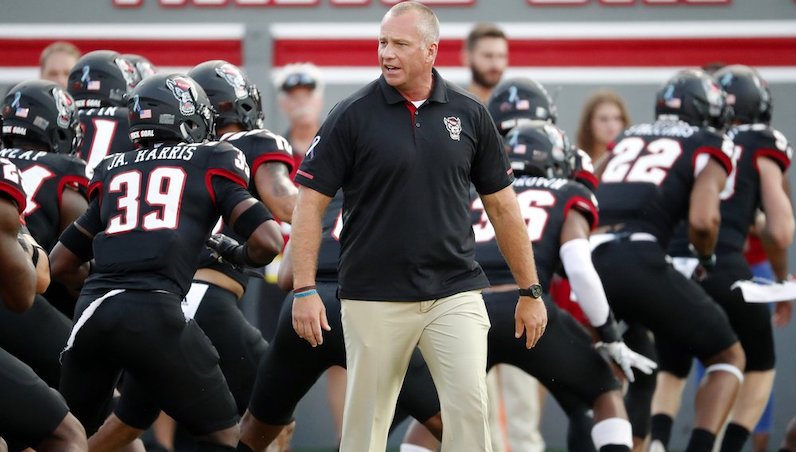 North Carolina State head coach Dave Doeren watches his team warm up prior to the start of an NCAA college football game against Ball State in Raleigh, N.C., Saturday, Sept. 21, 2019. Doeren said the team had three positive coronavirus tests over 2½ months before students returned. Clusters followed and the school soon paused all athletics activities, including football practices for about a week before postponing this weekend's game at Virginia Tech to Sept. 26. (AP Photo/Karl B DeBlaker, File)

Over the last few months, Rogers, who plays his prep ball for Rolesville (NC) High, has quickly shot up recruiting boards. Now a 4-star prospect, Rogers ranks as the No. 2 player in the state of North Carolina (2023) and a top-150 prospect nationally.

Plenty of other regional programs have entered the mix, too: Duke, Virginia, Virginia Tech and South Carolina have all offered Rogers, too. However, his recruitment spans far wider, now. Penn State, Oregon and Notre Dame have also made offers, among others.

With that said, NC State and UNC are working to ensure that Rogers doesn’t leave the Triangle; it’s setting up as a potentially crucial bit of local competition.

Rogers was also in attendance at the camp; he continued to flash the skills that make him such a coveted prospect.

Cyrus Rogers, Noah’s older brother, is a 2021 prospect who had a good 2021 season and could attract interest from schools, too.