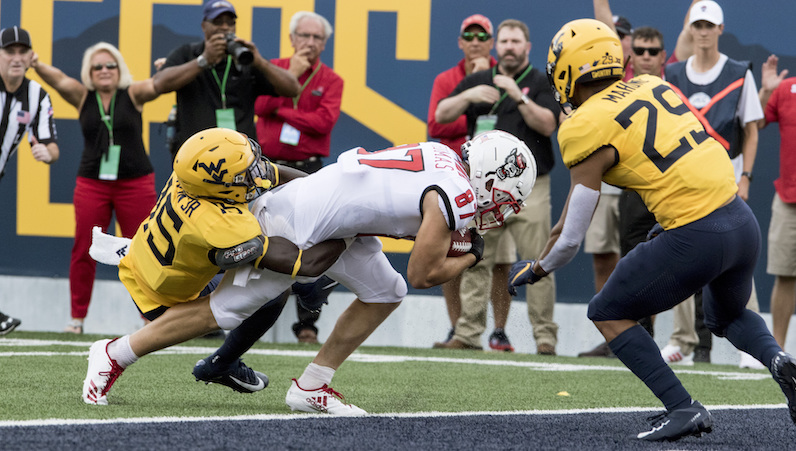 By this point, you’ve already heard the jokes: Is Thayer Thomas the best quarterback on NC State’s roster? While that question — and its derivatives — are made in jest, it’s still pretty amazing to take a look not only at his (limited) track record as a passer, but also what Thomas brings to the table as a unique offensive talent.

On four career pass attempts, Thomas has three completions for 106 yards — 26.5 yards per attempt — and two touchdowns. Both of those touchdown tosses have come this season: 2-of-2 passing, 50 yards and two scores.

NC State likes to motion Thomas around, hoping to isolate him for one-on-one matchups — or to use as preamble for trickery. However, the design for his touchdown pass against Syracuse was different from the one at West Virginia.

On this play, Thomas is split wide, behind the line of scrimmage. Bailey Hockman is under center with Tabari Hines, who motions out, and Trent Pennix in the backfield; the powerful Emeka Emezie is split to the top of the formation. Hockman pitches wide to Thomas who has a two-man protection group in front of him, thanks to the motion of Hines. Emezie clears his side of the field, going right to left on a slant.

Pennix, an excellent receiver out of the backfield, hesitates for a second, sees no one from Syracuse latch on and departs for all kinds of daylight behind Emezie.

Thomas makes the throw, perfectly. That’s beautiful play design and execution. If NC State continues to have trouble pushing the ball down the field — 6.3 yards per pass attempt, No. 12 in the ACC — then gadget plays like this may be necessary to find chunk yards.

Thomas already has 19 receptions (third most on NC State) for 227 yards and a touchdown this season, too. During NC State’s win over Ball State last month, Thomas returned a punt 76 yards for a touchdown as well.

He’s now the first FBS player since 2015 — when Christian McCaffrey did it — to throw for two touchdowns, gain at least 200 yards receiving and return a punt for a touchdown, all in the same season.

Over the last 20 season of FBS football, only 46 players, including Thomas, have recorded at least one touchdown pass, one touchdown catch and one punt return for a touchdown in the same season. That list also includes future NFL players like C.J. Spiller, T.Y. Hilton, Ryan Switzer and Deuce McAllister.

Of that group, 10 have hailed from the ACC, including Georgia Tech’s Jonathan Smith, who did all three in the same game back in 2003 — a win over UNC.

Thomas has proven to be a reliable receiver for NC State — his primary focus. After catching over 72 percent of his targets last season, Thomas has continued to help move the chain for NC State. Over 63 percent of his catches in 2019 have gone for first downs or touchdowns: 12 of 19.

He’s averaging just shy of 12 yards per catch. Thomas also has five receptions of 15+ yards, too.