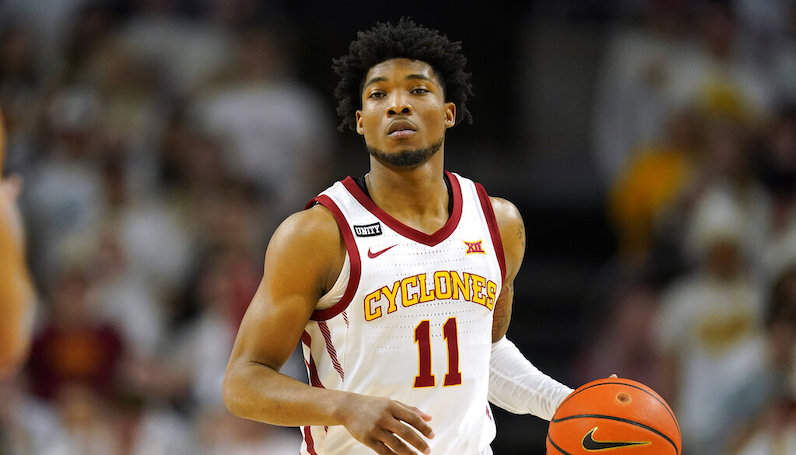 Tyrese Hunter, one of the premier talents in the NCAA transfer portal, has narrowed his list of schools to six, including one ACC program. Hunter, who was the Big 12 Freshman of the Year at Iowa State this season, will decide between Louisville, Kansas, Texas, Tennessee, Purdue and Gonzaga.

Iowa State transfer Tyrese Hunter, the best available player in the portal, is down to Tennessee, Kansas, Louisville, Gonzaga, Texas and Purdue. https://t.co/LtugfQOiyy

The 3-ball ran hot and cold for Hunter this season; he finished up shooting just 27.4 percent from beyond the arc. However, Hunter can be incredibly explosive with his pull-up jumper once he gets it cooking. When Iowa State upset LSU in the First Round of the NCAA Tournament, Hunter splashed 7-of-11 3-point attempts.

According to KenPom, Hunter posted an assist rate of 32.1 percent, a Top 40 number nationally. He can also be a pest guarding the ball; Hunter finished with a steal rate of 3.8 percent this season, one of the best numbers in the country.

Tyrese Hunter in the portal is a thing. Impact guard defender, impressive flashes finishing in the paint + shooting off-dribble. PnR passing vs. Miami in the NCAA Tournament was superb

The assist numbers only tell part of the story in terms of Hunter’s passing, though. He’s an incredibly functional passer, capable of making all kinds of funky reads.

Hunter’s passing vs. Miami’s ball-screen trap in the 2022 NCAA Tournament was super impressive.

Miami's pick-and-roll trap has given lots of ball handlers trouble this year, but Tyrese Hunter (5-9 FGA rim, 7 assists, 3 steals) looked comfortable making reads, including some rather daring passes, like this extended pocket pass — with ISU's exit action tying up the corner pic.twitter.com/p9qsHg1WDF

Late last week, Kenny Payne and Louisville landed former Tennessee big man Brandon Huntley-Hatfield, a 5-star prospect in the 2021 class. That was a major get for the program, one that boosts the team’s overall talent level. Hunter, however, would be another level above that.