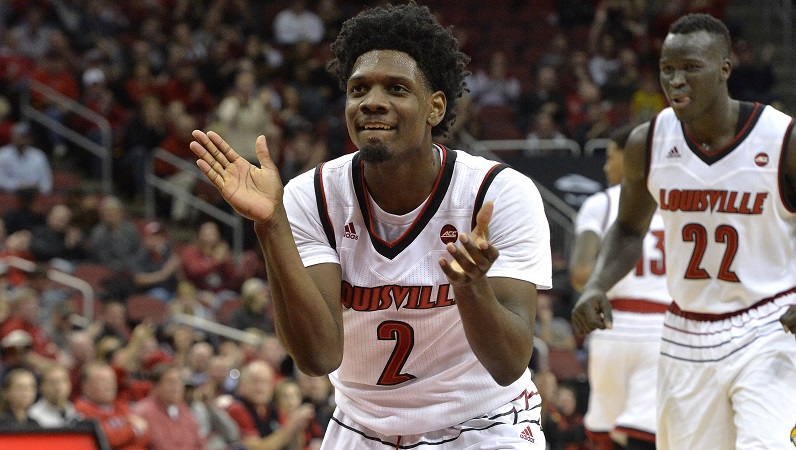 Despite all the turmoil off the court at Louisville, David Padgett has gotten off to a relatively easy transition to head coaching on the court. Playing a collection of overmatched opponents, all at KFC Yum! Center, the Cards are off to a 4-0 start.

Things will get much tougher for U of L Tuesday night, as they travel to West Lafayette to face Purdue. But it’s been so far so good for Padgett, who stepped in amidst some of the most challenging circumstances any first-time head coach could imagine.

Another Cardinal transitioning into a significant new role is Darius Perry, Louisville’s heir apparent to Quentin Snider at point guard. Perry is earning his keep as the sixth man in Louisville’s rotation. Though he hasn’t made any starts, the 6-2 Perry is getting more minutes – just under 20 per game – than any other Cardinal reserve.

Former Louisville head coach Rick Pitino and assistant Kenny Johnson went into the talent-rich suburban Atlanta area to pull Perry. A product of Peach State hardwood power Wheeler High School in Marietta, Perry chose the Cards over in-state Georgia. Perry’s criticism of rival Kentucky’s player development made him a hero to Cardinal fans before he even arrived on campus.

Padgett is finding opportunities to get both Perry and Snider on the floor together often in U of L’s perimeter-heavy rotation. Both are distributing the ball well, combining for a 29-to-10 assists-to-turnovers ratio.

Perry has been shooting better than Snider from outside, converting four of 12 shots from 3-point range (33.3 percent), compared to Snider making just five of 21 attempts (23.8 percent). Perry’s ability to convert from the perimeter will go a long way in solidifying Louisville’s offense.

Louisville is in the top 20 nationally in the kenpom.com adjusted defensive rankings. That can be partially attributed to Perry, who is tied for third on the team in steals.

George Mason, Omaha, Southern Illinois, and Saint Francis are not exactly a quartet of national juggernauts. But the Cards held those four teams to a combined average of just 63.2 points per game. The four teams shot just 36.2 percent from the floor, and 31.3 percent from the 3-point line. Perry has been a thorn in the side of opposing guards on the defensive end of the floor, getting in their faces and disrupting their movements.

Perry has the lowest rebounding average of any Louisville player with more than 30 minutes of playing time. This is one area where Perry might better help the Cards, though as a point guard his primary role is perimeter defense, compared to rebounding. But Perry’s play has been solid as he settles into an important role in Louisville’s lineup. If he can keep it up against stiffer opposition, his playing time will maintain, if not increase.

Read more: What should we expect this season for Louisville basketball?

Louisville RB Javian Hawkins opts out; will prepare for NFL