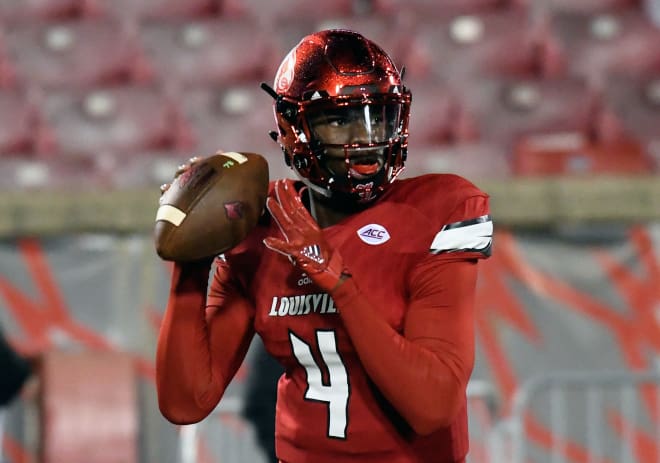 Perhaps no young quarterback in America has bigger shoes to fill this fall than Louisville’s Jawon Pass. The former 4-star quarterback out of Columbus, Georgia has paid his dues, serving as Lamar Jackson’s primary backup last season following a redshirt season in 2016 – the year Jackson won the Heisman Trophy.

Pass, who goes by the nickname of “Puma,” now steps into Louisville’s prolific offense with a cool, focused approach that has both surprised and impressed his coaches and teammates.

“What I like about him (Pass) is his demeanor,” Louisville’s leading returning receiver, Jaylen Smith, said. “He’s a guy who’s very cool, calm, and collected at all moments of time. It’s very hard to rattle a guy like that. The way he approaches everything is so calm that it’s scary. You don’t know if it’s a good calm, or you don’t know if he’s nervous inside. But I like it. I feel like it’s a good thing.”

“But I do know this – I do know every player on our team respects him, and is looking forward to playing with him.”

While Pass may have a detached personality, nobody in the Cards’ locker room denies his natural leadership ability. Over the past several months, Pass has assertively embraced the role as leader of the U of L offense.

“Jawon is a natural born leader,” said Smith. “It’s in him. Once he came, he knew what he was getting himself into. He knew he was going to play behind a guy like Lamar. He learned a lot, and you can see he’s learned the plays, he’s learned the progressions. His physicality is not a question to me.”

“Yeah, I think what Jaylen said is really true. He’s a natural leader. When he stepped on campus, you could see that,” Petrino added.

Petrino and his staff have only a small sample size of game experience by which to assess Pass. He only appeared recorded statistics five times last fall. But when Pass did take the field, he didn’t disappoint.

Pass completed 69.7 percent of his passes (23-of-33) with two touchdowns and no interceptions in 2017. In addition, two of Pass’s 13 recorded rushing attempts were for 23 or more yards, as he demonstrated his ability to exploit opposing coverage vulnerabilities. It all added up to a robust 150.3 quarterback rating for Pass, which would have ranked second, behind only Wake Forest’s John Wolford, had Pass been Louisville’s full-time starter.

Pass has done something the past couple of seasons that many college football players don’t want to do anymore – wait their turn.

In an era when kids are transferring left and right because of diminished playing time, Pass was willing to serve two years as Jackson’s understudy and heir apparent.

Pass took time each day in practice to carefully learn and soak in as much as he could to prepare for the moment when it was time to take over. That moment has finally arrived.

“One of the things I like so much about Puma was — like when I would go coach Lamar, go to him and coach him after a play and run down the field, I would turn around and run into Jawon,” Petrino said. “He would follow me so he could hear what I was saying to him.”

“Puma is a really good player that’s really been an inspiration to all of us. Because at the quarterback position, it’s one of transfer throughout the country,” Petrino added. “He’s a very highly recruited young guy with high expectations and came in and sat and supported Lamar at everything that he did. He never once came into my office with any talk about transferring, and I really respect that. And I know he has the respect of all of his teammates on how he’s performed every time that he’s went out on the field.”

Hear more: Petrino: “I’ve always had the philosophy that you mold your offense around the quarterback”