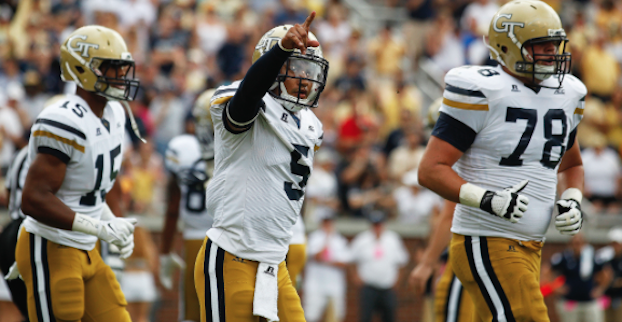 Justin Thomas (middle) led Georgia Tech to an 11-3 record in his first year as a starter. (AP Photo)

Often embracing the role of underdog, Georgia Tech won’t be entering the 2015 season as an under-the-radar college football team. Picked to finish fifth in the Coastal Division last July, the Yellow Jackets proved all doubters wrong, capping off an 11-3 season with a 49-34 Orange Bowl victory over Mississippi State.

The Jackets lost a lot in the offseason, particularly at offensive skill positions, but they do return the most important piece to the puzzle in junior Justin Thomas. In his first year as starting quarterback, Thomas was nothing short of fantastic, consistently making good decisions and adding speed to the position.

The good news for Thomas is that he’ll be playing behind an offensive line with loads of experience. All-American guard Shaq Mason must be replaced, but five players with at least seven starts are back from a line that helped Tech become the No. 2 rushing offense in the country in 2014.

Throughout the spring, however, the O-line has been banged up. Tackle Chris Griffin will miss all of spring practice as he recovers from a knee injury, center Freddie Burden has been playing with an injured wrist, and guard Shamire Devine hasn’t been available.

Despite the injuries along the offensive line, there aren’t any glaring holes up front. The same can’t be said for the running backs.

Georgia Tech lost six of its top seven rushers at the running back position from last season, and with Broderick Snoddy recovering from a broken leg, the team entered the spring without a single running back who scored a touchdown in 2014. Needless to say, Tech is thin at both A-back and B-back for the time being.

With early enrollee Quaide Weimerskirch now out for an indefinite period of time with a foot injury, redshirt freshman C.J. Leggett is the only healthy scholarship B-back who entered spring ball at the position. While incoming freshman Mikell Lands-Davis and Marcus Marshall will provide depth when they arrive this summer, Leggett has the inside track to becoming the starter in the fall.

At A-back, there are even more players who are seeing their first action in a significant role. With Snoddy sidelined, Dennis Andrews is the most experienced player at the position, and redshirt freshmen Clinton Lynch and Qua Searcy will have opportunities to contribute. Competition will increase this summer with multiple freshman A-backs entering the picture.

Tech isn’t hurting quite as much for depth at wideout. Michael Summers will be the leader of the receiving corps with 17 career starts under his belt, while sophomores Ricky Jeune and Antonio Messick will battle it out for the other starting spot. The biggest question will be whether or not anyone in that group has the playmaking ability of DeAndre Smelter or Darren Waller.

Defensively, the Yellow Jackets welcome back several players who improved as a group last fall. There were certainly weak spots, especially on the defensive line, but the team made up for it by leading the ACC in turnover margin.

The secondary is the most talented unit. Safety Jamal Golden and cornerback D.J. White are two of the best returning defensive backs in the league, and sophomores such as Lawrence Austin, Lance Austin and Step Durham all got their feet wet as true freshmen.

Not only did the Jackets finish second in the league in interceptions with 18, but they returned five of those to the house. Scoring that many points on defense will always go a long way in helping the offense.

The defensive line is another group that serves as reason for optimism. A year ago, Adam Gotsis was the only returning lineman who had seen considerable action the previous season. That’s not the case heading into 2015.

Gotsis will be anchoring the D-line once again, and he’ll be joined by ends Keshun Freeman and Rod Rook-Chungong, who each started at least six games last fall. The line could also get a boost from Jabari Hunt-Days, who made the rare transition from linebacker to defensive tackle while he was academically ineligible in 2014.

At linebacker, Tech must make up for the loss of All-ACC performer Quayshawn Nealy, but the Jackets boast a veteran group led by junior P.J. Davis, senior Tyler Marcordes and junior Anthony Harrell.

While the defense has more answers than questions, that’s the case on special teams as well. Kicker Harrison Butker will try to lead the team in scoring for the third straight year, and Ryan Rodwell attempts to hold on to his starting role at punter. Following a 2015 campaign in which he earned ACC Honorable Mention as a specialist, Jamal Golden will continue to return kicks and punts.

It’s difficult to replicate the type of season this team had last fall, especially when youth and injuries could force the offense to take a step back. That said, an improved defense will prevent any major dropoff, and Georgia Tech should still be the team to beat in the Coastal.

Don’t get caught thinking that means the Jackets will abandon their underdog mindset, though.