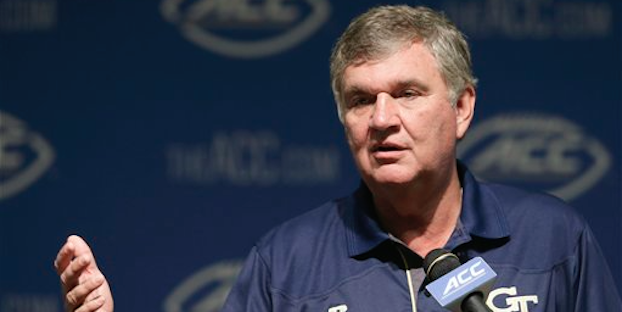 Georgia Tech added a key transfer in the offseason when former Stanford fullback Patrick Skov decided to play his final year of college football in Atlanta. During an interview with The David Glenn Show, Yellow Jacket coach Paul Johnson told the story behind Skov’s decision.

“He watched the ACC Championship Game on TV, and he and his dad called each other on the phone and said, ‘you’d be a perfect fit for that,'” Johnson said. “They contacted us, and once we got the release, we contacted him back.”

Coincidentally, Tech’s B-back situation in the spring was thinned by injuries, so the addition of Skov for this fall helped address an area of need.

“It just so happened we had an open scholarship,” Johnson stated. “Patrick graduated from Stanford with good grades. He got into our grad school, which is hard to do, so we’re anxious to see what happens.”

Although he hasn’t yet practiced for the Yellow Jackets, Skov was listed as the No. 2 B-back on the team’s post-spring depth chart.

“As I told him, he’s got to come in and beat some guys out that are there, but we’ll give him every opportunity to see if he can do that in fall camp,” the head coach said.

During the interview, Johnson also talked about his reaction to Georgia Tech being picked first in the Coastal and what makes Justin Thomas such a special player. Click below for the full interview: