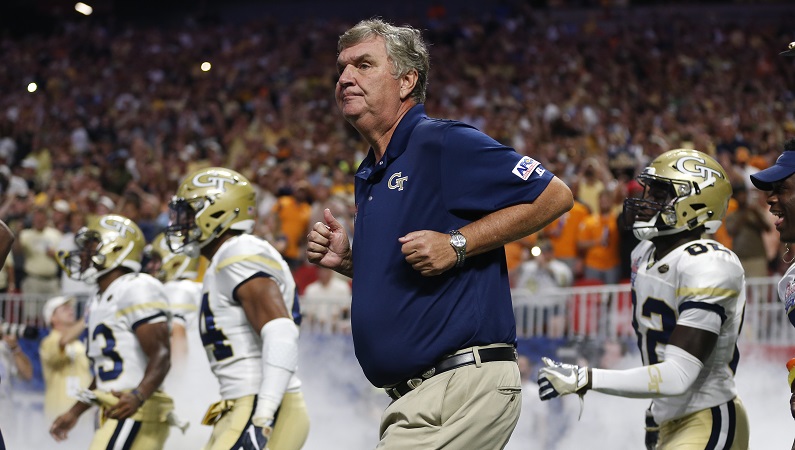 Georgia Tech head coach Paul Johnson runs onto the field with his players before an NCAA college football game against the Tennessee in Atlanta. Georgia Tech is preparing for a stretch of eight straight ACC games, beginning with Saturday's home game against Pittsburgh, after having it's planned game against Central Florida cancelled by Hurricane Irma. Coach Johnson hopes having a well-rested team will compensate for having a game removed from the schedule, which he said is "like losing." (AP Photo/John Bazemore, File)

After two disappointing seasons, Paul Johnson is looking to get Georgia Tech in the ACC Coastal Division race once again in 2018. The Yellow Jackets have been rebuilding in the secondary this spring, while working to develop depth up front on both sides of the ball. What are some of the key position battles heading into the summer?

With 13 of Georgia Tech’s 17 defensive backs underclassmen, much of the theme defensively this spring has been determining the future of the Yellow Jacket back four. The Jackets are replacing Corey Griffin, Step Durham, and the Austin brothers (Lance and Lawrence) with a new batch of athletes.

One of the players stepping up for the Yellow Jackets is Christian Campbell, a rising fourth-year junior who played in 11 games last fall. Campbell has the inside track to one of the starting safety positions for GT, while A.J. Gray, the team’s most experienced returning defensive back, will hold the other.

Gray has played mostly free safety so far at Georgia Tech, which would hint that the Yellow Jackets will play Campbell at strong safety. But with first-year GT defensive coordinator Nate Woody shuffling the DBs around during spring workouts, the veterans are more interchangeable. Jalen Johnson is another safety who will be in the rotation for the Yellow Jackets.

Senior Lamont Simmons is a probable new starter for Georgia Tech at cornerback. His tandem on the other side of the field is Ajani Kerr, who saw his first collegiate action last season as a redshirt freshman.

Although reports out of Georgia Tech’s spring camp indicate the Yellow Jackets are banged up along the offensive line, Brad Morgan is making a push to the top of the depth chart. Morgan has been working with the starters at right guard this spring, with Will Bryan limited.

Jahaziel Lee has been stepping up at left tackle, while right tackle Andrew Marshall has been absent this spring as he continues to recover from a leg injury that ended his season prematurely in 2017. While the Yellow Jackets are hopeful that Marshall will be ready to step back in at right tackle come August, the emergence of Morgan at right guard could make it possible for Bryan to move over to tackle if circumstances require it.

With fourth-year junior Matthew Jordan’s decision to conclude his playing career after the 2017 season, the Yellow Jackets are left without a clear-cut backup to TaQuon Marshall. This wouldn’t be as much as issue with some programs. But with Marshall’s propensity to run out of Georgia Tech’s triple option offense, the possibility he’ll be forced to miss game action is higher than a lot of pocket passers. Georgia Tech must develop a capable backup to feel good about its chances heading into next season.

The top options are Lucas Johnson, a rising third-year sophomore, and Tobias Oliver, who redshirted the 2017 season. Johnson has the edge in superiority, but he’s been injured for much of the spring. Although a true position battle hasn’t really materialized this spring for the backup quarterback job, it has provided more reps for Oliver. Training camp will determine which one is best equipped to back up Marshall. But Oliver, a three-year starter in high school who won a state championship at Warner Robins High School in the Georgia Dome back in 2014, has momentum heading into the summer.