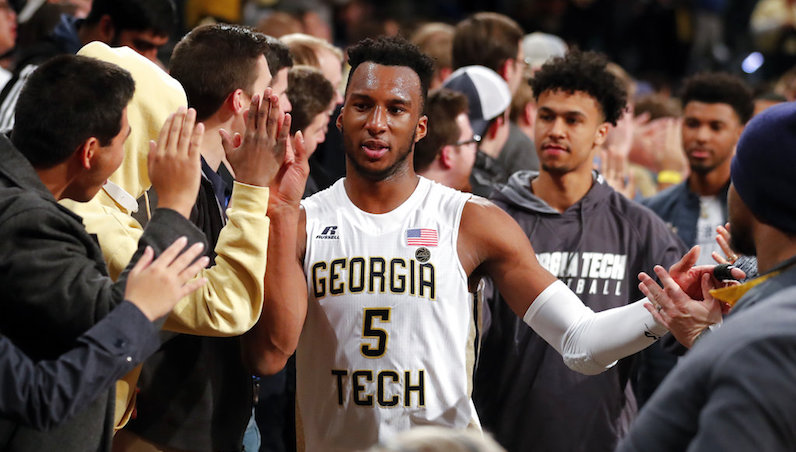 Josh Okogie’s decision to stay in the NBA Draft pool has complicated matters for Georgia Tech heading into Josh Pastner’s third season in Atlanta. Okogie’s departure means that the Yellow Jackets are losing three of their top four scorers heading into 2018-19.

Between Okogie (18.2 ppg), Tadric Jackson (12.7 ppg), and Ben Lammers (11.7 ppg), Georgia Tech is losing 64.8 percent of its scoring from a season ago. What’s more, Okogie, Jackson, and Lammers took the lion’s share of Georgia Tech’s shots. Between them, the trio took a total of 982 shots from the floor – 55.4 percent of GT’s attempts among just three players.

The Yellow Jackets are also facing a significant void on the boards.

Gueye, Georgia Tech’s third-leading rebounder in 2017-18, is the only returning Yellow Jacket who recorded more than 100 rebounds last season. Pastner will be relying heavily on Gueye to step up as a senior and assume some of the production on the glass lost by Lammers’ departure.

The Yellow Jackets will also be looking for someone to help make up for the absence of Okogie’s 38 percent stroke from beyond the 3-point line.

Point guard Jose Alvarado, Georgia Tech’s top returning scorer, stands to get a lot of the looks next season that Okogie gave up by deciding to head to the pros. Alvarado shot 37 percent from 3-point range last winter.

Another player who figures to see his role increase as an outside shooter for the Yellow Jackets is rising sophomore guard Curtis Haywood II. Haywood tied Alvarado for second on the Yellow Jacket roster a season ago by shooting 37 percent from 3-point land (17-of-46).

With Okogie gone, Haywood has a chance, after making seven starts as a freshman, to assert himself as one of Georgia Tech’s top outside scoring options. Along with his ability from beyond the arc, Haywood also led GT by shooting 83.3 percent from the free throw line in 2017-18. It will serve the Yellow Jackets well to find Haywood opportunities to penetrate the lane and draw fouls as well as creating him opportunities to make 3-pointers.

Like Haywood, senior Brandon Alston is also in position to step up significantly offensively for Georgia Tech in 2018-19. After transferring in from Lehigh, Alston shot 35.6 percent from 3-point range (21-of-59) and finished fifth in scoring for the Yellow Jackets (5.4 ppg). Alston, who made 19 starts last season, will join Haywood in comprising a potentially promising one-two punch along the wing.