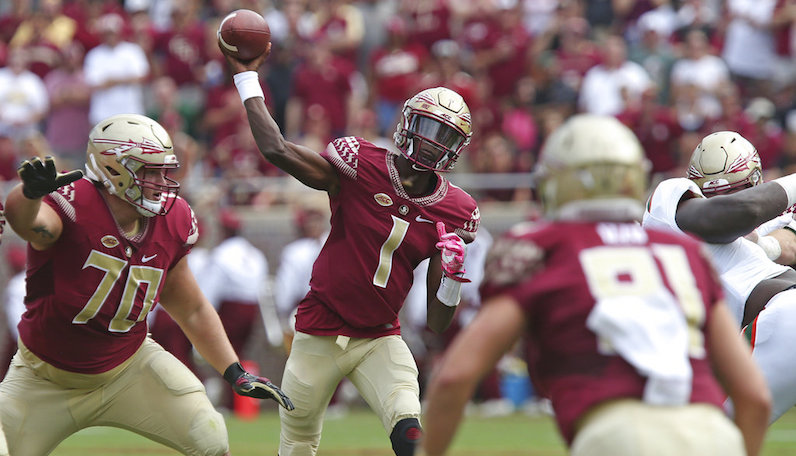 Aside from the coaching and culture change that has seemed to come with new head man Willie Taggart, quarterbacks have been the talk of the offseason for Florida State. Last week, a new name entered that discussion.

Taggart continued to make a splash on the recruiting trail with the addition of four-star Sam Howell, a pro-style quarterback from North Carolina. Howell was the first of five 2019 commitments for FSU from April 9 until Monday, vaulting the class to No. 1, per the 247Sports Composite rankings.

The addition of Howell may be the biggest so far and perhaps of the biggest commitment for 2019. The Seminoles have just three scholarship quarterbacks currently on the roster and one on shaky footing after recently being sent to a diversion program for marijuana use.

That last sentence is a reference to redshirt junior Deondre Francois. Francois was the 2016 ACC Rookie of the Year and considered by some to be a Heisman Trophy contender prior to suffering a season-ending knee injury in last season’s opening loss to Alabama.

Francois is thought to be in a position battle with sophomore James Blackman, who started 12 games last season in place of the signal-caller from Orlando. Francois has been far from 100 percent this spring and didn’t participate in the spring game and only minimally in practice.

The other competition will come from redshirt freshman Bailey Hockman, who played well through pain as the winning quarterback in Saturday’s spring game. Hockman has been regarded as the sleeper throughout the competition.

When Howell arrives in 2019, it’s unclear what the depth chart in front of him will look like. What is likely is for him to be redshirted in 2019.

Regardless of what Francois does this coming season, he’ll virtually never hinder Howell from getting on the field, unless he was given a sixth year of eligibility. In 2020, Howell would be a redshirt freshman on a roster with a senior Blackman and a redshirt junior Hockman, assuming neither of those players leave for the draft or transfer.

In today’s age however, it would be unlikely that someone as highly-regarded as Hockman would stick around for five seasons for the opportunity to start one. It is worth noting however, that both Blackman and Hockman will be eligible to declare for the draft after the 2019 season.

If Blackman stayed three seasons as the starter, it wouldn’t be inconceivable to see Hockman starting for two after that. That would certainly complicate things for Howell.

As far as Howell goes however, he has a chance to push for playing time as early as 2020, but the likely target date for him to take over the starting role would come as a redshirt sophomore in 2021. Assuming everyone stays, the latest that would be likely to happen would come in 2022.

Read more: Projections for starters in the secondary for Florida State