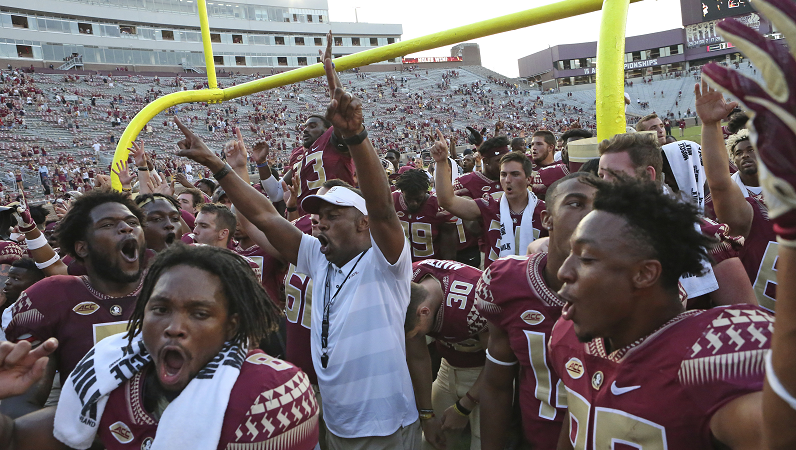 Any time an institution goes from public to private or vice versa, it’s sure to draw skepticism, but the latest move from the Florida State athletic department does more to bring the Seminoles into the 21st century than it does anything else.

While the private/public aspect may draw scrutiny, the structural change actually brings FSU more in line with a number of universities similar in size and athletic stature, including arch-rival Florida.

Earlier this month, FSU announced that the athletic department and Seminole Boosters, the university’s sports fundraising arm, would be under one banner moving forward. The two organizations previously had similar objectives, but co-existed separate of one another with other boards.

Beginning with a rift

The previous structure largely escaped scrutiny up until former head football coach Jimbo Fisher departed for Texas A&M toward the end of the 2017 season. During his departure, reports surfaced about strained relationships between Fisher and Andy Miller, the president of Seminole Boosters.

Fisher, who took shots at FSU’s willingness to acquiesce to his demands at his introductory speech in College Station, reportedly preferred more focus on football operations, instead on projects as prioritized by Seminole Boosters. It was also reported that Fisher would more commonly report to FSU President John Thrasher as opposed to Stan Wilcox, the director of athletics, at the time.

How it will be organized

Under the previous structure, one could easily argue that the one with the purse strings, Miller, had more power than the athletics director. Under the creation of the Florida State University Athletics Association, the university president will serve as the chairman of the five-member voting board with both Miller and current athletic director David Coburn reporting to the president.

The board will oversee everything from budgets to strategic plans to projects to scheduling. Previously, a difference in opinion could ultimately handicap projects getting completed, which could be detrimental in winning the proverbial “Arms Race” in modern college athletics.

When it comes to creating a more modern structure, age may have also been a factor. The people at the top in this instance may not have much time left making major decisions and leaving successors with a more workable arrangement may have played a role.

Thrasher is 75 and likely has his days numbered as university president. Miller has held his current post since 1975 and at 68 years old, is nearing retirement. Coburn was initially hired as the interim athletic director before recently being given the permanent role and there’s a decent chance that his tenure will be short.

With younger faces likely to soon occupy some important posts at FSU and the athletic department, it was the elders in this case who helped move Florida State into the future.