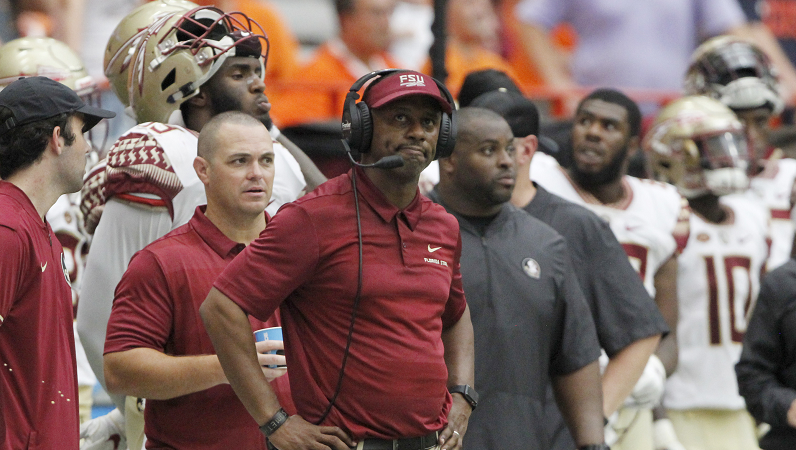 The midway point of the first year of the Willie Taggart era hasn’t been the glowing success that many had hoped as Florida State sits at just 3-3 through six games.

After some early struggles that included an escape at home against Samford, an FCS program, and a 30-7 road drubbing at the hand of Syracuse, the goodwill that Taggart had spent an entire offseason developing had evaporated. The last three weeks haven’t brought about old school dominance, but they have seemed to have delivered a little more patience from the fan base.

A .500 record at the midway point and blowing a 20-point lead against rival Miami probably aren’t recipes for success, but after the early parts of the year, there has been immense improvement. Had the Seminoles managed to hold during last Saturday’s 28-27 loss to Miami, they may even hold a top-25 ranking at this point.

The reaction to the initial hire of Taggart was mostly positive despite his 47-50 overall record and FSU being his fourth coaching stop since 2012. By bringing former FSU legends including coaches Bobby Bowden and Mickey Andrews into the fray and hiring a young slew of ambitious coaches, Taggart quickly won over the fan base. Some had suggested that a 10-win season was on the table for 2018.

Midway through however, it is obvious that a turnaround will take time. The offensive line inherited by Taggart and the new staff was in worse shape than initially thought and redshirt junior Deondre Francois has been far from fluent running Taggart’s “Gulf Coast Offense”.

The rough start and dismal offensive showing has seemed to make fans forget about the fact that FSU was 3-6 at one point last season and needed to reschedule a contest with Louisiana Monroe to keep the nation’s longest bowl streak alive. That may be a challenge this season and FSU is just 3-3 and will play four AP top-20 opponents over the final six games, including two top-5 teams and two on the road.

Patience to pay off?

Failing to do that may intensify the early part of the Taggart era, but fans have to acknowledge that the first-year man has a history of turning programs around. At Western Kentucky, Taggart inherited a program that had lost 20 games in a row. That three-year tenure was capped with back-to-back winning seasons and the school’s first bowl appearance as an FBS program.

Although he didn’t stick around for the Birmingham Bowl, Taggart delivered South Florida a school record 11 wins and its first ever AP ranked finish in his fourth and final season of 2016. In his only year at Oregon, Taggart’s Ducks improved from 4-8 to 7-5.

Turning around Florida State after disappointing seasons hasn’t been as easy and won’t come as quickly as many originally thought. Given his track record however, there’s no reason not to believe that things won’t get better in due time. At the very least, Taggart will get at least two years and probably three to turn it around. A strong finish to 2018, especially if it included a sixth straight win over Florida, would create a lot of additional leeway.