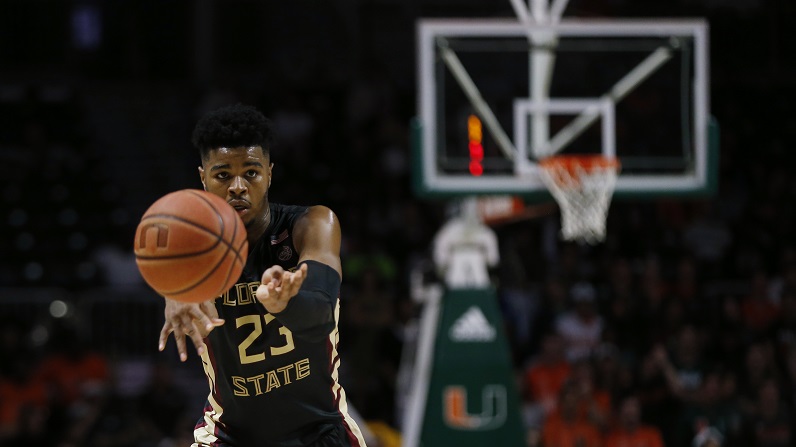 The regular season is halfway done for FSU basketball and the conventional wisdom indicates that it was a success. Despite a 1-2 record in ACC play, the Seminoles are 12-3 overall, ranked 23rd in the AP Poll and own wins over ranked teams in Florida and North Carolina.

Entering this season, an NCAA Tournament appearance would have been considered a successful campaign. If March Madness got underway today, there is no doubt that FSU would be part of the field of 68.

Looking back on the first half of the season, here are five definitive takeaways:

1. Depth is Still a Strength

Despite losing its three leading scorers from last season and four total starters, the Seminoles are still one of the deeper teams in the ACC and arguably the country. FSU has nine different players averaging at least 14 minutes per game and 10 averaging at least eight. With the exception of Chris Koumadje, who missed 11 games with a leg injury, the Seminoles have managed to stay injury-free.

2. Three-Point Shooting Has Become a Strength

Defense, depth, athleticism and more recently, the ability to get out and run, have long been regarded as strengths of a Leonard Hamilton-coached basketball team. This season, FSU has found another and it’s from beyond the three-point arc.

Shooting 37.5 percent from deep, the Seminoles currently rank sixth in the ACC in that category while leading the conference with 139 makes entering Monday. That percentage would be the highest for FSU since the 2005-06. Averaging 9.3 makes per game, the Seminoles are on pace to make 279 triples during the regular season. That would be 52 more than last season and the most in program history.

The hot shooting comes despite sharpshooter PJ Savoy having a sub-par campaign from deep. The junior, who was the returning leader for FSU when it came to makes, has knocked down just 18 triples this season and is shooting just 34 percent from deep compared to 40 last season. Instead, Braian Angola, Phil Cofer, MJ Walker and CJ Walker all have more than 20 makes. Of those four, only CJ Walker, who shoots nearly 38 percent, is shooting under 40 percent from distance.

3. Terance Mann is the Face of the Team This Season

Unlike last season’s trio of Dwayne Bacon, Jonathan Isaac and Xavier Rathan-Mayes, junior Terance Mann doesn’t have the look of a typical scorer and isn’t seen as a big time NBA prospect. Still, he’s managed to be THE guy for Florida State this season. Mann has been somewhat of a quiet assassin, dissecting opponents often without them realizing they’re being dissected.

Mann leads the Seminoles in three major statistical categories with 14.5 points and 6.1 rebounds per game while shooting better than 61 percent from the field. Mann also ranks third on the team in assists and fourth in steals. Mann has scored in double-figures in 12 of his 15 games this season, including a career-high 25 in a win over Florida.

4. Senior Improvement Has Been Key

Entering the season, Florida State was considered a young team with a lot of untapped potential. One of the biggest reasons for the Seminoles’ success, however, has been the improvement of their two scholarship seniors. The most notable is Phil Cofer. After a solid freshman campaign for the Seminoles during the 2014-15 season, injuries limited Cofer as a sophomore and he just looked lost in the offense as a junior.

This season, Cofer has found his niche, ranking second on the team, averaging 13.7 points and 5.3 rebounds per game. Cofer has been efficient, shooting 53 percent from the field and a team-best 45 percent from downtown. At 6-foot-8, Cofer has been able to score on the block, rebound and stretch the floor.

The other scholarship senior is 6-6 guard Braian Angola. Angola is in his second season with the program after transferring from junior college. After averaging just 4.6 points per game last season and 1.2 assists, Angola is now averaging 13.3 points and a team-high 3.3 assists. He also leads the team with 1.7 steals per game and 34 three-pointers made. In three ACC games, Angola is averaging a team-high 19.7 points.

5. CJ Walker is the X-Factor for FSU

Consistency has not been there for sophomore point guard CJ Walker, but when he is on, the Seminoles are extremely hard to beat. Walker tends to play a bit out of control, but can score in a hurry and brings a lot of energy to the floor.