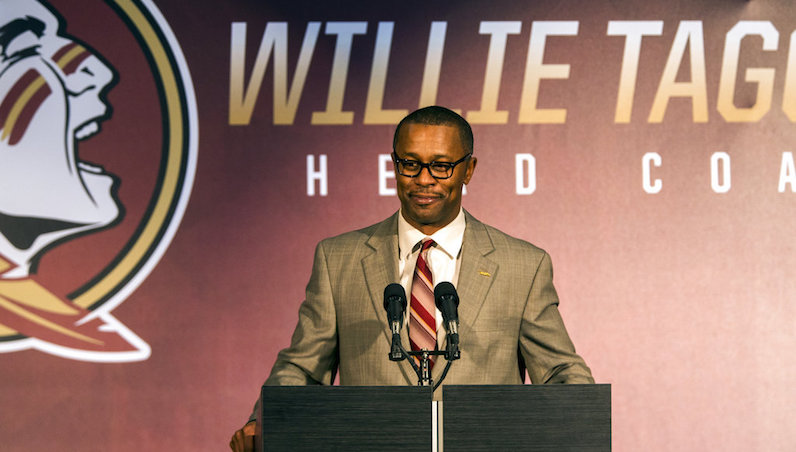 The first true coaching search at Florida State in more than four decades has brought Willie Taggart to Tallahassee.

Formerly the head coach at Oregon, South Florida and Western Kentucky, Taggart has wasted little time winning over a fan base that was soured by the end of Jimbo Fisher’s tenure. Taggart has called FSU his “dream job” and looks to breathe life into a program coming off its worst season perhaps in 40 years.

One thing that FSU fans can expect is what Taggart referred to as “lethal simplicity” and that’s offense. Despite having starting quarterback Justin Herbert available for just seven games this past season, Taggart’s offenses at Oregon and South Florida over the last two seasons have put up more than 40 points per game.

Usually from the shotgun or pistol, Taggart is expected to bring a run-heavy attack to Florida State. Run plays have traditionally accounted for more than 60 percent of the play calls in a Taggart offense. Offensive linemen take wide splits, which forces defenses to stay especially disciplined in gap responsibility and leads to a number of big plays.

Although Quinton Flowers flourished as the American Athletic Conference Offensive Player of the Year under Taggart, his offenses don’t require a running quarterback. Herbert this season at Oregon and Kawaun Jakes at Western Kentucky were primarily passers.

When it comes to passing, Taggart’s offenses have generally been a mix of shots down the field and wide receiver screens. In four of Taggart’s eight years as a head coach, his offenses have averaged at least 7.97 yards per pass attempt.

Running things on the other side of the ball is expected to be another former USF head coach in Jim Leavitt. This season, Leavitt improved the Ducks’ defense from 126th to 41st in total defense. In the two years prior, Leavitt served as Colorado defensive coordinator where he took a defense that ranked 113th in 2014 to 87th in 2015 and 17th in 2016.

With Leavitt at the helm, FSU is also expected to transition from a 4-2-5 or 3-3-5 depending on what one considers the “BUCK” position to a 3-4 with bigger defensive ends. Expect rush ends like Brian Burns and Joshua Kaindoh to be used as outside linebackers moving forward.

Stacy Kirby, a three-star weakside defensive end, announced his decommitment on Monday, citing philosophical differences with the new coaching staff. This seems to further indicate that Leavitt will be running the defense.

One area where Florida State is expected to continue to flourish with the addition of Taggart is on the recruiting trail. Prior to the decommitments following the Taggart to FSU rumors, the Ducks had the No. 6 ranked recruiting class nationally, according to the 247Sports Composite rankings, which was on pace to be the best ever for the school and by a wide margin.

Recruiting has always been a strength for Taggart. Three of his four classes at South Florida ranked first in the American Athletic Conference.

One area where FSU has struggled on the trail in recent years is the Tampa area, which happens to be Taggart’s wheelhouse. Three of Taggart’s commitments at Oregon were blue-chip prospects from the area. There is also speculation that Taggart could end FSU’s infamous “Armwood curse” which refers to the Seminoles’ inability to pull recruits from the powerhouse Armwood High School in Seffner.

Warren Thompson, a four-star receiver from that school and Isaiah Bolden, a four-star cornerback from Wesley Chapel and a former FSU commitment, have each decommitted since Taggart agreed to become FSU’s next head coach. There is speculation that four-star defensive end Malcolm Lamar, also an Armwood prospect, could be next. All three are expected to join Taggart in Tallahassee.

The biggest knock that outsiders have on Taggart is that his career record is just 47-50. It’s worth noting however that at Western Kentucky and South Florida, Taggart was facing complete rebuilding projects.

At Western Kentucky, where Taggart coached from 2010-12, the Hilltoppers had gone just 2-22 in the two seasons prior to his arrival. After a 2-10 year to begin his tenure, Taggart took Western Kentucky to its first two bowl appearances ever to end his tenure.

At South Florida, where Taggart coached from 2013-16, the Bulls had gone just 8-16 in the two years prior. Taggart’s team went just 6-18 over the first two seasons before going 8-5 in 2015 and 11-2 in 2016. Although Taggart didn’t coach the Birmingham Bowl against South Carolina to conclude the 2016 season, the Bulls finished ranked for the first time in school-history.

In his first season at Oregon, Taggart took a team that finished 4-8 the year prior to a 7-5 finish.

While Taggart has turned around every program he’s been to, it’s worth noting that those turnarounds have been gradual and expectations have never been what they will be at FSU. With that said, the cabinet that Taggart inherited at previous stops was much more bare than what he’ll be getting in Tallahassee.

With plenty of talent on the roster, FSU fans will expect to compete for ACC titles, New Year’s Six bowls and national championships right away. Gradual improvements aren’t an option.