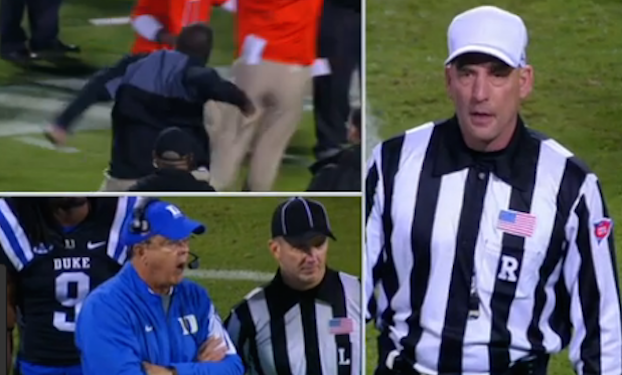 The ACC suspended referee Jerry Magallanes and his crew after the controversial ending to Saturday’s Miami-Duke game.

The league pointed out four mistakes that the officials made on the eight-lateral kickoff return that gave Miami a last-second win over Duke and suspended everyone involved for two games.

The 52-year-old Magallanes is an experienced referee. He was chosen to officiate the 2011 ACC Championship Game and last season’s Peach Bowl. He was chosen by the Philadelphia Daily News for the 1980s Philly High School All Decade Team after starring as a running back and kick returner for Father Judge High School. He played for two years at Hofstra before an ankle injury ended his career.

Magallanes began his officiating career calling pee wee games as a 24-year-old. He quickly moved on to high school and worked his first college game in 1997. After seven years working Division II and I-AA (now FCS) games, ACC scouts spotted him at a Georgetown game in 2004. His first work for the conference was the 2005 North Carolina spring game.

Magallanes and his crew have remained fairly intact over the last two seasons. Terrance Ramsay, Robert Luklan, Michael McCarthy and Tracy Lynch have all been with Magallanes. Lynch moved to a different position this season, from linesman to center judge.

An interesting note: The names of the replay officials aren’t listed in the official box scores, so we can’t track their performance over time, like we can refereeing crews.

A look at the crew’s officiating style shows that they’re stricter than other crews, although not off the charts.

Team Magallanes called an average of 6.6 penalties per team last season for 57.5 yards. In their other, non-Magallanes officiated games, the same teams averaged 6.1 flags for 51.7 yards.

In UVa at BYU, the crew penalized the Cavs eight times for 86 yards and the Cougars 12 times for 133. In their non-Magallanes games, Virginia averaged six flags for 54 and BYU eight for 76.

The crew was also flag-happy for Syracuse-Notre Dame. The Irish were called for eight penalties and 80 yards, double their average in their other 12 games (four for 34). Syracuse was flagged 10 times for 85 yards in the game, seven for 57 in the Orange’s other contests.

In a blowout of NC State, Clemson was flagged nine times for 103 yards, well over its average of 3.6 flags for 29.6 yards. The Tigers were hit with just three flags and 21 yards against Georgia Tech, the second time they had the crew, however.

UNC was an outlier in the other direction. The Heels averaged 8.2 flags for 68.9 yards in 11 of their games with other crews last season. In two games with Magallanes’ crew calling the penalties, they were hit with four and five flags respectively, losing 35 and 28 yards.

This year, Team Magallanes has called 7.9 penalties per team for an average of 68 yards. That’s above the teams’ averages in other games: 6.0 flags for 50.6 yards. However a huge chunk of that difference was the 23 penalties for 194 yards that Miami racked up on Saturday. Throw out that game and Magallanes’ crew is still above average, but not by as much.

Information on replay review is a little tougher to come by. According to box score data, all 11 replay reviews of Magallanes calls this year were upheld. Last year, 12 of 15 calls were upheld, which is much closer to the league average.

The verdict: Magallanes is an experienced ref with a stable, experienced crew. There don’t appear to be any strong patterns favoring one team or another in his recent games. While they call a few penalties more than other crews, there’s nothing over-the-top in the data to suggest that Saturday’s debacle was part of a pattern of poor officiating.

Read more: Mack Brown on Sam Howell Draft Stock: “Everybody talks about Sam being drafted in the 1st round”