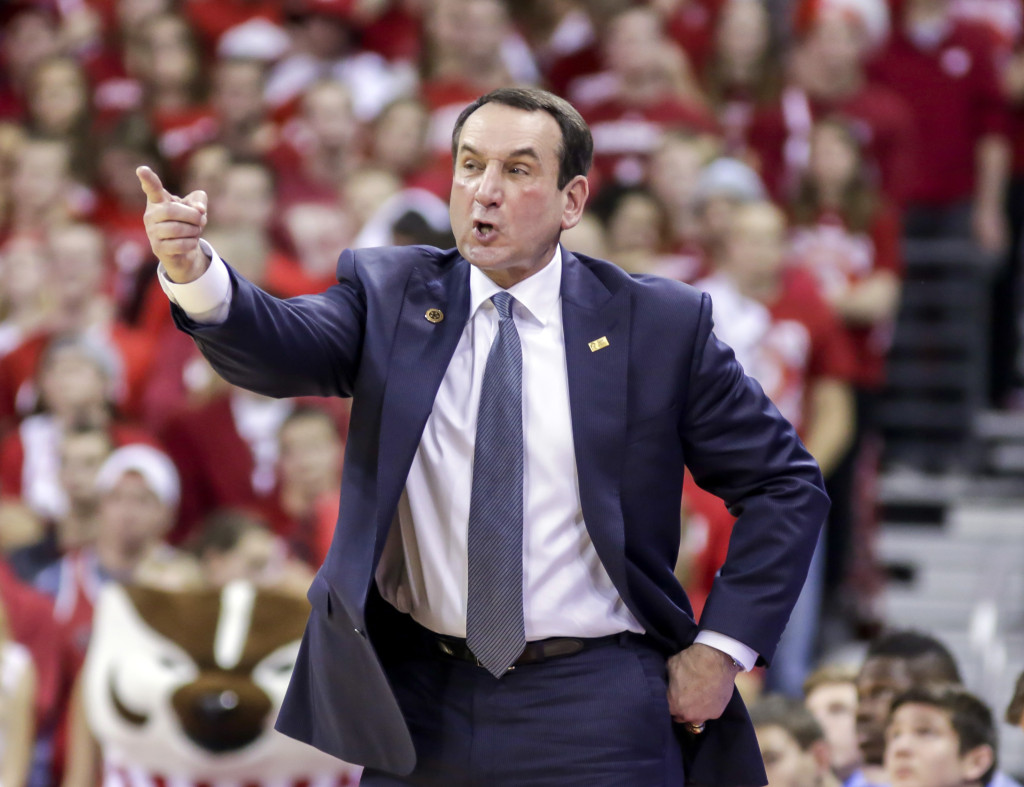 Duke coach Mike Krzyzewski created a bit of a stir earlier this week, in an interview with ESPN, when he admitted that he’s on Twitter, using an alias.

“I follow guys,” coach K said. “I don’t want to be on Twitter because I don’t care. I don’t want their opinions. I don’t need to show that I have X amount of followers. But I follow a lot of people on Twitter, under an alias. I tell my guys I’m following you. Then if I see something, you text them, you gotta watch. But there are a lot of cool things that they do. I do like that they do it.”

Krzyzewski has hinted on other occasions in the past that he kept tabs on his team on social media, going incognito. His previous statements didn’t rule out the possibility the he merely read his players’ tweets, without having his own account. The ESPN comments, however, were his most explicit admission that has a Twitter account.

That leads to the obvious question–perhaps the most intriguing question since “Who is Deep Throat”–what is Coach K’s Twitter?

It’s not an easy task–Jahlil Okafor has 80,600 followers. Matt Jones has more than 8,000. And a large number of Duke fans follow everyone on the team, which is about all we know about the secret K account.

We can narrow things down a bit if we look at Coach K’s motivations. He wants to keep tabs on his program, and make sure people aren’t tweeting things they shouldn’t. “I follow a lot of people on Twitter.”

So, if we make the following assumptions, we should be able to narrow things down:

1. Coach K wouldn’t do a lot of tweeting.  if someone follows all the relevant people but live tweeted the Game of Thrones finale, it’s probably not Coach K.

2. Coach K would want to keep an eye on EVERYONE in the program. That means he’d want to follow the team’s managers as well. An errant tweet by a manager, who is present for practice and listens in on the mid-game huddles, would also be troubling to him. Jamie Stark, a 2014 manager, has just 446 followers.

3. Coach K would care what recruits are tweeting. That may be as important to Coach K as what the current team members have to say. How is a recruit responding to Duke’s message, and what are they saying about the staff and program? Coach K got in mild NCAA trouble a few years ago due to a tweet from future Kentucky player Alex Poythress. He’d want to follow them. And while superstar recruits like Brandon Ingram, Harry Giles and Dennis Smith Jr. have almost as many followers as the current team, Wendell Carter, who has a Duke offer, has just 1,438. Antonio Vrankovic, who signed with Duke as part of the incoming freshman class, has 2,840.

Just 66 people follow both Vrankovic and Carter. Many of them are sites that cover Duke recruiting, like Devils Den and Blue Devil Lair. It’s doubtful that Coach K would run an entire recruiting site in order to create a Twitter alter ego, so we can throw them out.

Further cutting the list by manager names and Nick Pagliuca, who has just over 200 followers, and we have a short list of candidates.  Here are some good bets for Coach K’s Twitter account, ranked in order from least to most likely:

“Taylor Ostrick” — @Ostrickk_T: This account followed everyone on my short list. Everyone. There wasn’t a cross check that didn’t include Taylor. Of course, she follows 2,001 people, including me. I find it hard to believe that Coach K follows me. Taylor has also tweeted 53,400 times and runs a Duke blog.

VERDICT: Not Coach K, but thanks for the follow

“Emily” — @nsfwlife:  The name got my hopes up. The account follows the right people and shares its first name with Coach K’s mother, and it would seem right up Krzyzewski’s alley to name his account “Not safe for work life”.  The account follows too many non-Duke people, however, including Ryan Seacrest and several sites related to Charlotte dining. Plus, the account has tweeted 4,000 times and the last three consisted entirely of emojis.

“Mr. Incredible”–@OptimumBMI: I can’t tell you how badly I want this to be Coach K’s account. If I were Coach K, I would totally name my account “Mr. Incredible” and “Optimum BMI”. 1,566 follows and 4,229 tweets both seem like too many. He’s also retweeted “Mind Body Green” and “Disney Words” which seems un-K-like.

VERDICT: I wish, but probably not Coach K

“Chris Cogan” — @ccogan: This account also got my hopes up. It showed up on the cross checks of several recruits. It’s only tweeted 10 times. And the tweets (and follower list) is protected. “Only confirmed followers have access to @ccogan’s Tweets and complete profile.” That seems like something Coach K would want to do. (“Craig Mailen” @Mailman2927 is another protected account that shows promise.) The profile header features two photos of an older blonde girl and a younger blonde kid. Looking at the YouTube video of Coach K doing the ice bucket challenge with his grandkids and there are two blonde girls. One nearing her teens and one much younger.

VERDICT: Could it be? Chris still hasn’t approved my follow request, so we may never know.

BennettJ @dukekmbs: I like this one. It follows a lot of people –861, but, other than the shows “Madam Secretary” and “Grey’s Anatomy” I can make a case that most of the others would have some interest to Coach K. There are a lot of political follows, including recent Duke basketball guest George HW Bush, and military-related follows. There are Stanford and Notre Dame basketball-related follows (both coached by members of K’s coaching tree) and Northwestern’s director of basketball operations (coached by longtime K assistant Chris Collins). Most of the tweets are retweets of stories about Duke that … I could see K retweeting. Plus, check that Twitter handle again: Duke K MBs. Hmmm…

VERDICT: It could be Coach K

“Lonnie Fowler Jr.” — @LFowler82: Lonnie also follows everyone. It showed up on every cross check I tried. The account has never tweeted. It’s organized into several lists, including Duke Recruits, Duke BB Managers and retired Duke players. Coach K would want to be able to narrow his news feed with lists, so that makes sense. Of course, there are also lists for MMA fighters and Arkansas Razorbacks basketball, which don’t make sense.

VERDICT: It could be Coach K