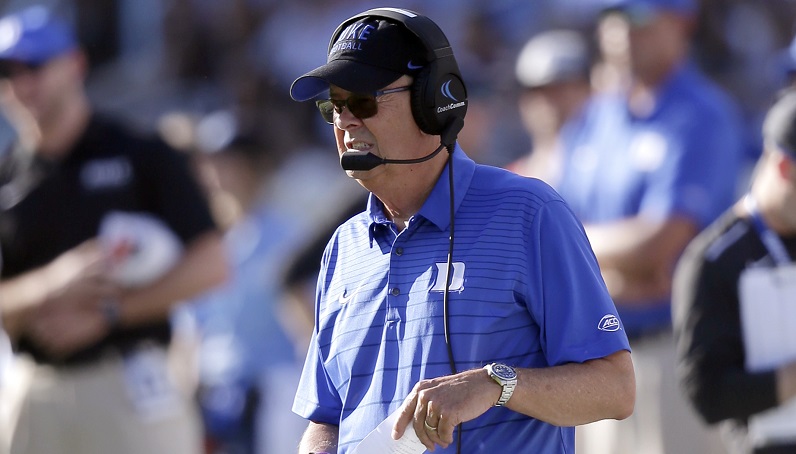 With five months until the December signing day, Duke football’s recruiting for the 2019 class is rock solid. The Blue Devils have 17 committed players and, according to 247sports.com’s rankings, they comprise the No. 5 class in the ACC that’s No. 27 nationally.

The class is even more impressive considering Duke lost two committed players, one a four-star recruit, to other in-state ACC schools.

Donavon Greene, a 4-star wide receiver from Mount Airy, and 3-star running back Zonovan Knight from Southern Nash High School, were part of Duke’s early wave of 2019 commitments earlier this year.
But, within three days of each other in May, both rescinded their pledges. While both said they still were interested in Duke, they wanted to make other visits. That’s long been something that doesn’t work for Duke coach David Cutcliffe.

“Young man will commit 100 percent and parents jump in there, and all of a sudden — well, I just want to go visit,” Cutcliffe said. “I’m 100 percent committed. It’s no different than if you are engaged to be married and you tell your spouse-to-be that I’m getting married but I want to go on three dates. Let me tell you how long you’re going to be engaged. Ten seconds maybe.”

Greene wound up committing to Wake Forest, while Knight has since pledged to NC State.
Their moves haven’t stopped Duke from putting together a strong class but the optics were poor.
NC State, Wake Forest and Duke all won bowl games last season. Like any program, they put an emphasis on landing in-state talent. So seeing two highly rated players commit but change their minds appeared to cast Duke in a negative light.

The Blue Devils, though, are steadfast in their belief they handled the recruitment correctly by sticking to established standards. Could they have kept Greene and Knight committed even after they made visits to other schools? Perhaps. But Cutcliffe is firmly against such scenarios.

The new rules allowing visits during a recruit’s junior year, instituted in conjunction with the new
early signing period, only makes this worse, Cutcliffe said, “I don’t want a kid to commit to us that I don’t know, and it happens occasionally, they will decommit, which is not really a word,” Cutcliffe said. I don’t want to contribute to this. I make it hard for them to commit, believe it or not. That’s what I think about it.”

Despite losing those two players, Duke still has six in-state commitments. The Blue Devils took a commitment from three-star running back Jaylen Coleman of Porter Ridge High School in Union County a month after Knight backed off of Duke. That same week in June, they added three-star wide receiver Darrell Harding from Winter Garden, Fla., to replace Greene in the class.

Hear more: David Cutcliffe on Duke football, 2013 to 2018: “The personalities of the two teams are similar