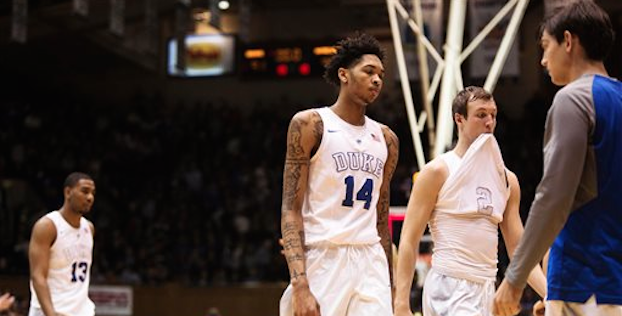 Duke is coming off three straight losses in ACC play, including two at home. (AP Photo)

ACC historian Barry Jacobs recently joined The David Glenn Show to discuss Duke’s ceiling, North Carolina’s championship potential and NC State’s chances of turning its season around. During the conversation, he was asked if Duke is one of the top dozen teams in the country.

“I don’t think that this year’s Duke team has enough high-end parts to compete for championships,” Jacobs said. “I questioned that going into the season.”

Jacobs pointed out one of the main differences between last year’s Blue Devil team and this year’s.

“If you look at last year’s freshmen at Duke, whom one of their assistants pointed out to me had played years of USA Basketball before they’d ever came to college, they weren’t like freshmen. They came in poised and polished to a greater extent. These guys look like freshmen, and they’re inconsistent like freshmen.”

Does Jacobs think UNC has a shot at winning the national title this season? Click below to hear the full interview: