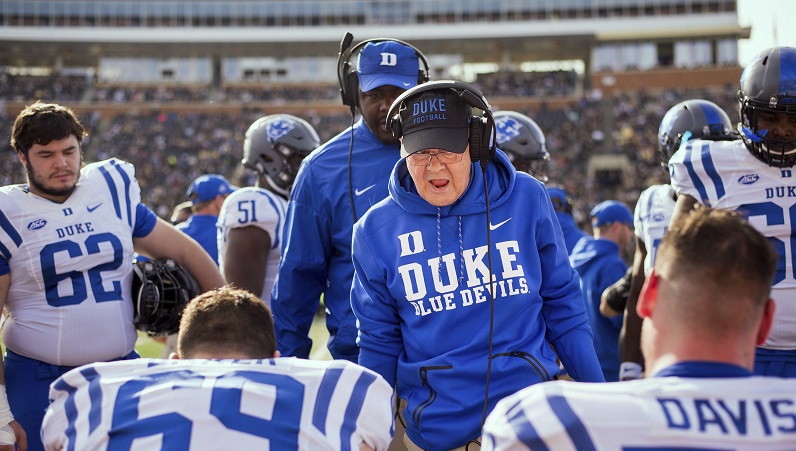 Duke head coach David Cutcliffe speaks to players on the sideline after a touchdown in the second quarter of an NCAA football game against Wake Forest, Saturday, Nov. 25, 2017, at BB&T Field in Winston-Salem, N.C. (Allison Lee Isley/The Winston-Salem Journal via AP)

For the fourth time since David Cutcliffe left his job as Tennessee’s offensive coordinator to become Duke’s head coach in December 2007, the Volunteers are looking for a new football coach.

Just as occurred the previous three times, Cutcliffe will not be returning to Knoxville to take over the program he’s spent the majority of his coaching career representing.

Though he could earn more money working at the SEC school, Cutcliffe remains happy to be coaching at Duke and not interested in Tennessee’s overtures.

He makes enough money — his salary is at $2.6 million this year. Still that’s lower than the $4.1 million Butch Jones made before being fired by Tennessee last month.

However, at Duke, Cutcliffe is beloved as the coach who took over the worst program in Division I and is taking it to its fifth bowl game in six seasons this month. He’s entrenched as the Blue Devils head man with strong support from Duke’s administration.

Duke won 10 games over the eight seasons prior to his arrival. He won nine games over his first two seasons. Even with back-to-back 3-9 seasons in 2010 and 2011, Cutcliffe received more than just a vote of confidence.

In September 2012, Duke embarked on an even larger facilities improvement project for the football program. Wallace Wade Stadium, opened in 1929, saw a renovation that made it look like a new stadium.

Seating capacity was increased to 40,004 and a new five-story tower was built packed with luxury boxes and club seats.

In November 2012, after Cutcliffe’s Blue Devils earned the program’s first bowl appearance since 1994, he received the first of three contract extensions.

His compensation pool for assistant coaches has jumped, one thing he wanted even if it meant his own salary would be lower.

It’s that kind of cooperation and understanding between the football staff and Duke’s administration that keeps Cutcliffe at Duke even when more money is available at other jobs.

Duke has won at least six games every season but one since the second of those 3-9 seasons. Cutcliffe’s recorded a 43-34 record over the last six seasons, including this season’s 6-6 mark.

Kiffin went 7-6 in one season before famously bolting to Southern California. Dooley went 15-21 and was fired. Jones compiled a 30-21 record before his pink slip arrived.

Tennessee has had four winning seasons since Fulmer retired. Cutcliffe has logged three and can notch his fourth with a win over Northern Illinois in the Quick Lane Bowl at Detroit on Dec. 26.

In the college football world, few would say Duke’s football program is superior to Tennessee, which averages nearly 107,000 people per game at mammoth Neyland Stadium.

But Cutcliffe, a Tennessee assistant coach from 1982-98 and 2006-07, has stayed with Duke despite four chances to lead the Vols.

Maybe that says more about Duke than it does about Tennessee.