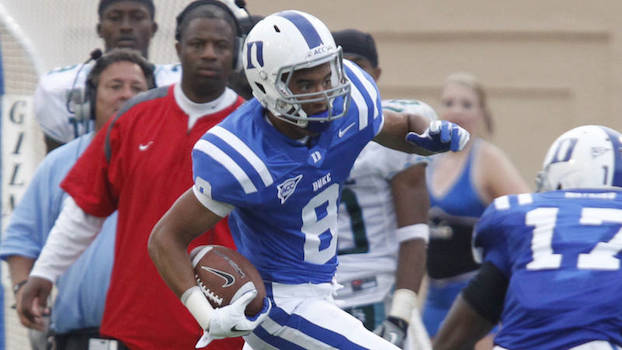 Duke football senior Blair Holliday was one of five recipients of the 2015 Wilma Rudolph Student-Athlete Achievement Award by the National Association of Academic Advisors for Athletics (N4A). Holliday was presented with his honor at the N4A National Convention Award Luncheon Saturday in Orlando, Fla.

As a freshman football player in 2011, Holliday played in 10 games and caught three passes for 30 yards. He was slated to start at wide receiver in 2012 before suffering a traumatic brain injury in a personal watercraft accident on July 4, 2012, on Lake Tillery near Charlotte, N.C., that ended his playing career.

“A brain shear of that magnitude is something people don’t come back from,” Duke Assistant Director/Academic Support Services Jeremiah Walker said. “The doctors can’t do anything. Medical professionals can’t help him. They’re just waiting like everybody else.”

After the accident, Holliday spent a month at UNC Hospitals before being transferred to the Shepherd Center in Atlanta, Ga.

“My true wakeup time was probably sometime in Atlanta,” Holliday said. “I realized I didn’t know where I was or what I was doing. I didn’t see anything around me that was familiar. As I started to go through rehab, they started to tell me what happened.”

Once at the Shepherd Center, he gradually relearned to walk, sit, talk and laugh.

“He laid there for two weeks, motionless,” Walker said. “Then his eyes were open and he was smiling, blinking and laughing as much as he could. It was one of those things where you just sat back and were in awe of the human body, and God.”

On September 16, 2012, Holliday made his first return to Duke since the accident and was an honorary captain for the Blue Devils’ game against N.C. Central. He attended every home game for the rest of the 2012 campaign and was on the sidelines in Charlotte for Duke’s first bowl game since 1995, the 2012 Belk Bowl.

“It literally went from how we were going to prepare for a funeral to him opening his eyes,” Duke head coach David Cutcliffe said. “I was nervous when I went to the Shepherd Center because I didn’t know what to expect. I left there with great hope that Blair was willing to do what it took to make the progress he needed to make.”

Holliday officially reenrolled at Duke in May of 2013 and, on the football field, shifted positions to an undergraduate student assistant coach. Holliday has served in that capacity for the last two seasons, watching the Blue Devils turn in the best two-year stretch in program history with 19 victories.

“I was definitely trying to get back here and earn my Duke degree,” Holliday said. “Similar to how Wilma Rudolph looked up to her older sister and used her to push her through adversity, I wanted to show my younger brothers that no matter where you are, what situation you’re put in, if you give it your all, things will turn out well for you.”

Holliday and will begin his third season on the sidelines this fall as Duke opens the 2015 campaign on September 3, at Tulane.