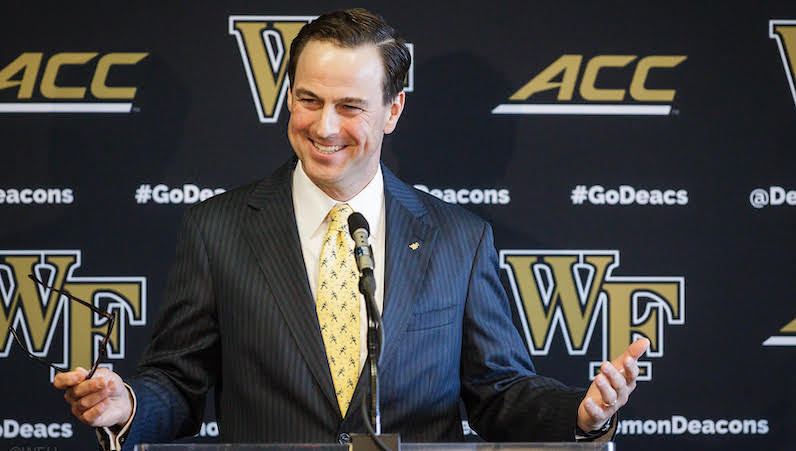 Wake Forest holds a press conference to announce the retirement of long time Athletic Director Ron Wellman, and the appointment of John Currie ('93) as his replacement, at Bridger Field House on Monday, March 4, 2019. John Currie ('13), who started his professional career at Wake Forest under Ron Wellman, gives his remarks. (Photo courtesy of Wake Forest Athletics)

Wake Forest director of athletics and star wide receiver Sage Surratt participated in a “Live From the Quad” Zoom segment on Thursday. During the call, Currie and Surratt discussed a variety of topics, including expectations for 2020 football season.

Currie said, currently, Wake Forest may look to have fewer fans inside Truist Field — assuming a 2020 season gets off the ground.

Currie: "We may have fewer fans in the stands than normal."

Said he and Stan Cotten will discuss some of that later in the call.

Currie also noted that safety is at the top of Wake Forest’s list of priorities; opponents that play against the Demon Deacons in Winston-Salem this season must clear criteria set for the ACC for testing standards.

After Surratt and Currie both encouraged Wake Forest fans and those listening to wear masks whenever in public, Currie also noted that, since the start of the fiscal year (July 1), Deacon Club donations are ahead of where they were at this point in 2019.

I'd stake my meager paycheck that Deacon Club donations are ahead compared to last year based mostly on one coaching change at Wake Forest.