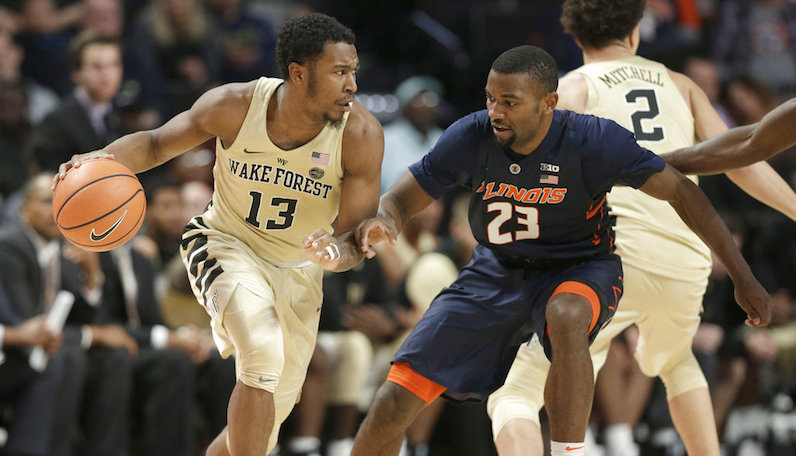 A challenging season on the court has carried over into a trying offseason for Wake Forest basketball. On Tuesday: another blow. Point guard Bryant Crawford, a three-year starter at Wake Forest, will sign with an agent and remain in the 2018 NBA Draft.

The news was first reported by Shams Charania of Yahoo Sports.

Sources: Wake Forest junior guard Bryant Crawford will remain in the NBA draft and has signed with an agent.

On offense, Wake Forest runs a lot of spread pick-and-roll action; that’s the preferred style of Danny Manning, who frequently put the ball in Crawford’s hands, and asked him to go make a play.

Next Season in Winston-Salem

The loss of Bryant Crawford means Wake Forest must replace its top three scorers from last season; along with Crawford, Doral Moore and Keyshawn Woods have also departed the program.

In 2017, those three guys and John Collins helped Wake return to the NCAA Tournament for the first time since the 2010 season. The Demon Deacons boasted a top-10 offense nationally, but were a nightmare defensively — a trend of Manning’s time in Winston-Salem.

In all four of Manning’s seasons at Wake Forest, the team has ranked outside the top 125 in defensive efficiency.

The 2018-19 campaign will likely be another challenge for Manning, who is just 54-72 at Wake Forest — that includes a 20-52 record in ACC play. The high-water mark of his run was a 19-win team that was bounced during First Four play of the 2017 tournament. This doesn’t bode well.

Without Crawford, Wake Forest will need more from Brandon Childress (9.1 points, 3.6 assists), who showed some promise during his sophomore season.